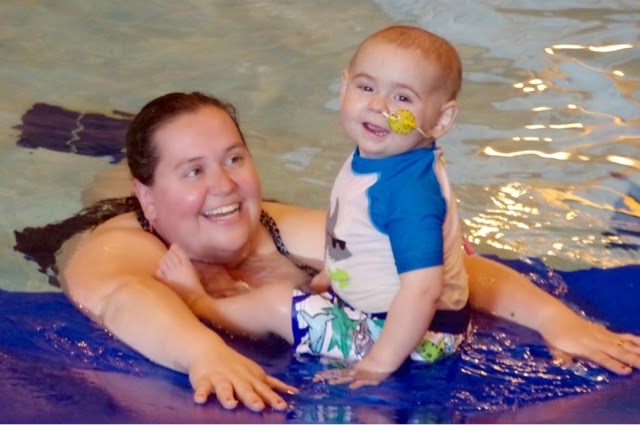 Another few weeks, another non-update update. We are thankful for the time.

When the doctors said at the start of April that this was it - again - I imagined it would all happen quickly. But we decided not to change anything and so far, he hasn't really got any worse.

One thing we have realized is that the percentages lie. When his cancer was reported as 14 per cent a month ago, that wasn't the best way of looking at it. The 14 per cent was in comparison to his white blood cells, not the entire sample. And his bone marrow - ravaged by all of the treatments and transplants and radiation and drugs - just isn't producing much of anything at this point. The longer it takes to recover, the slower the cancer cells are produced as well.

So even though he now has to get platelet transfusions every three days, it seems to mean we get more time.

He's been to gymnastics classes, swim classes, play time with friends and family and is loving it. For the first seven games of NHL playoffs he managed to wear the losing team's jersey - you may recall he had visits with both the Canucks and Flames in January.

He's also a two-year-old, starting to test his boundaries and getting in to trouble. That mainly involves throwing things to the ground - he's still good about cleaning up and putting things in the garbage when we ask.

Today we are back in Calgary, where for the first time in months I am alone with him here at the children's hospital. Just more platelets today, but while waiting we both got tired.

The temporary room had a standard child's bed instead of a crib so I snuggled in with him for a half hour.

Times like these are precious. Not just because we don't know how much longer we have left with him, but because for the past 19 months he's been hooked up to so many cords for things like oxygen, medications and nightly feeds that he's had to sleep in his crib. To be able to lie down and doze off together is a gift made more valuable by its rarity.

We've made it to Mother's Day. The last one was spent in the ICU. We'll spend this one at Camp Kindle at a special brunch.

Next up: Father's Day. But really? Tomorrow. One day at a time.