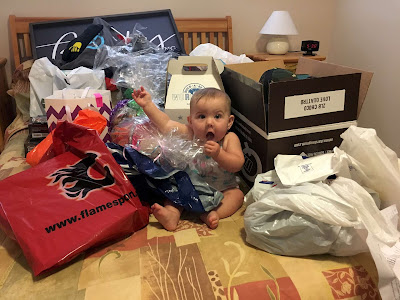 I really should've written a couple more blogs this month, but the truth is it's been a little crazy around here.

A 120-plus-item online auction is not a cakewalk, even if you've done it before.

Started two years ago by Kristine Russell, the #Dominicstrong online auction was a neat way to raise some extra money for our Extra Life efforts. She set it up as a photo album on Facebook where every photo is an item that you bid on by commenting. Every penny raised goes to the Alberta Children's Hospital via our Extra Life pages.

For small businesses it's a way to give back to the community with relatively little harm to the bottom line. You donate an item or a gift certificate, your name is attached to a charity. Boom. It's amazing how many people say yes when we ask if they'd like to help out.

The fear, of course, is that nobody will bid and you're left holding items. But in the two years of the auction, there's been exactly one item that didn't get a bid. And that was a store credit so nothing was really lost.

We've got a room in our house that gets very, very full this time of year. The bed was covered in gifts - scarves, games, artwork, electronics, shirts and gift cards by the dozen. And once the auction is done it'll slowly get taken away, and we'll finally be able to walk around in the room.

It is a lot of work to go around to dozens of businesses and ask, but it's been worth it. So many of them have heard our story and the ones we get to tell about Dominic, and how great the Alberta Children's Hospital was to us those two years after his diagnosis, it's wonderful to know folks care and want to help us give back.

The first year, the auction was a big part of the US$45,000 we raised. I believe their goal was to get us to $30,000, at which point their whole family (kids included) shaved their heads.

Last year, the auction raised $10,000 (Canadian), the last $5 from someone who I casually mentioned to that we were that amount short of five figures. With 122 items we were simply astounded at the generosity.

Can you do me a favour and let a couple friends know about the auction please? There are plenty of items for everyone, and it goes to a good cause. Even if you don't live in Medicine Hat or Calgary, there may be things we could ship to you on the cheap. And if you do live in those cities, I'm pretty sure we can get purchases to you for free.

Perhaps the most emotional part of doing something like this is hearing about families who are spending time at the hospital who we hadn't heard of before. There are more than you realize. They're the reason we do this, in hopes the care their kids get is as good as what our son got.

I told one of them on Facebook that one day they'll miss the hospital. "I can't imagine feeling that," was the response. But trust me, when the people there are a second family to you for so long, you do miss them.

So thanks in advance for your support, and here's hoping we can keep doing this year after year.

P.S. - There's a story in the Medicine Hat News today about the auction: http://medicinehatnews.com/news/local-news/2017/09/29/dominicstrong-charity-auction-starts-at-5-pm/
Posted by Sean Rooney at 12:40