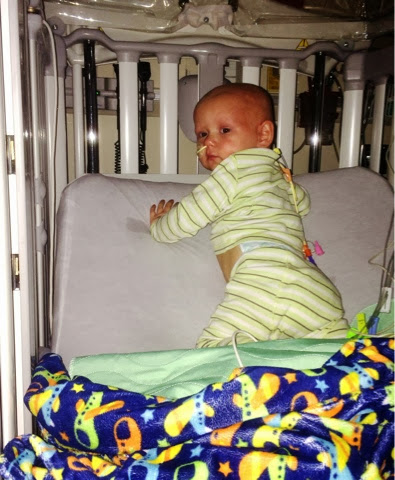 The ride down sucked as expected but there are signs Dominic is on his way back up.

He just needs to keep his hands and feet inside the car at all times. There's still lots that can hurt him.

Last week he added a fever to the mouth sores, skin discolouration and nausea, which resulted in an extra round of tests to see what it might be.

We were worried the adenovirus might be alive and well in him, but that was ruled out. Great, right? No, instead there's now sign of an enterococcus infection. It's a similar gastrointestinal bug and will require antibiotics to keep at bay, but we're told that for now it's not serious.

But, like anything else in a baby without an immune system, that could change at any time.

Hands in, make sure the bar is down.

The two dastardly bugs aside, the rest of the news is good. His blood counts - with the exception of the most important infection-fighting neutrophil cells - are rising. But they always rise last and slowest, like the last car in the roller coaster. Everything is pulling in the right direction.

More importantly, Dom's coming out of his shell again, albeit slowly and with a cautious eye. Unable to do more than watch me on a video call for days, on Tuesday he grabbed Trish's phone and accidentally hung up. I was glad to call back.

At 1 a.m. the night before, having napped at awkward times during the day, he stood up in his crib and rattled it as if to tell Trish "I'm better now, let me out!"

The mouth sores are decreasing, which means the morphine can too and the reign of cheezies as his lone non-tube food source may be at an end. Note, there will always be cheezies. We've tried to add less messy foods like licorice or apple or banana, but it always seems to come back to those orange moon-dust-covered beauties.

Aside from the side effects from his bone marrow transplant and associated regimen - he remains on 11 different drugs plus the NG tube - we're encouraged.