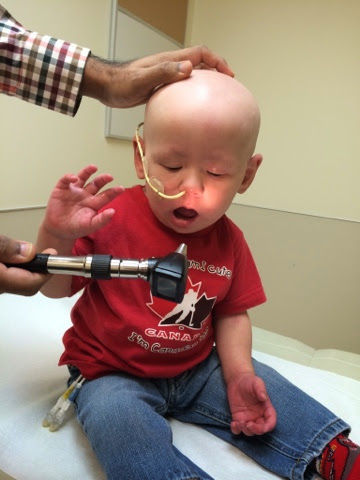 When I'm in Medicine Hat there are a few ways to keep connected with Trish and Dominic back in Calgary.

We can talk on the phone, send texts, even say hi on a video chat. When we're on FaceTime he'll even kiss the phone - albeit with his forehead. You take what you can get.

There's a less interactive way of connecting, too. We found an app for our smartphones which allows us to track everything he does. From diapers to medication, food and even his blood counts, it's totally customizable. It's called Total Baby if you're interested; we actually got it when he was a newborn but it's become a bit of a lifeline in the hospital given how often nurses come around asking for information.

Importantly for me here, it syncs between phones. So the first thing I do every morning is open the app and see how his night was, whether he's taken his meds and how much he ate for breakfast.

This morning he was slated to be in clinic to get more drugs for adenovirus. Normally that means a whole bunch of new entries. But when I checked the app there were none.

It turns out she got a call earlier with some good news. Dominic tested negative for adenovirus for the second time in a row. That means he can stop getting extra drugs to combat it - and stop going in to the hospital for seven-hour days.

They were sleeping in.

He'll still go in for a regular weekly checkup and blood work, and still needs a feeding tube because he's not eating enough on his own, but this is the equivalent of losing the training wheels. Or, at least, greasing them up.

This week I'm working a bit extra to spell off a co-worker who went nearly two weeks without a day off. I have no problem doing it now because of how Dominic's progressing.

One of the first things I did last year when Dominic was diagnosed with AML was join our friends who had chosen Extra Life to raise money for the Alberta Children's Hospital. Our team raised thousands of dollars, and I'm pretty sure we'll do it again this year.

Other friends and family are finding other ways to give back on our behalf. To no surprise, my sister Erin is leading the way. She's signed up for the Tour for Kids fundraiser which involves her cycling for three days in July; all of the funds she raises will go towards the Kids Cancer Care Foundation of Alberta. In less than a week she's met her original goal, much like I did with Extra Life. Please visit her page here to pledge your support.

If you want to do something like this please let me know so I can help you out and spread the word. There are an incredible number of events every year which support the hospital and children's cancer initiatives. The least we can do after all of the help we've received is pay it forward so that other families will get the same level of support.
Posted by Sean Rooney at 13:16