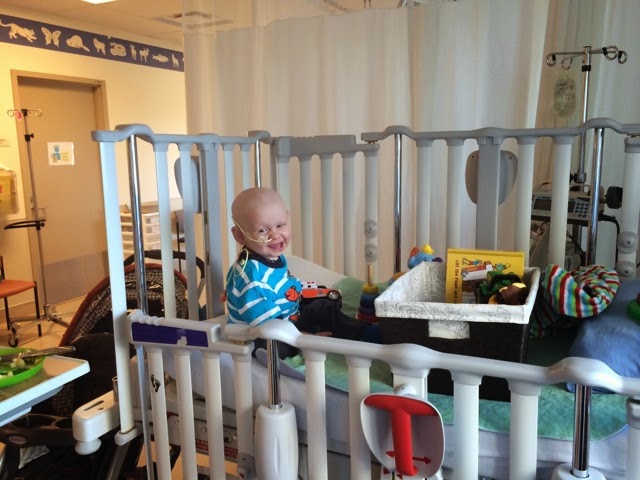 6 a.m. - Wake up, take down the tube feed system, change diaper and clothes, put handful of meds in syringes and feed.

7:30 a.m. - Out the door to the hospital for a seven-hour day spent mostly in a space no bigger than a queen-size bed (three-quarters of which is taken up by his crib).

Is this what cubicle life is like? The new routine doesn't feel like an improvement over the old one of being in the hospital full-time, but for the long run it's a necessary transition point.

Before this past Friday I'd never spent any time in the outpatient clinic at the Alberta Children's Hospital, largely due to the timing of my work schedule (Sunday-Wednesday) versus the most common day for Dominic to go there between sets of chemotherapy (Tuesday).

There's a myriad of differences. You sign in, there's a waiting room with plenty of things for the kids to do, but with us in at 8:15 a.m. four days a week we get in to the main part of the clinic pretty fast.

At first glance it resembles a triage - open area, easily modified for any conceivable situation, with plenty of curtains used to separate one patient from the next. There were only a handful of patients the morning I was there, but it can handle a dozen or so.

The nurses don't have time to linger at your bedside and play, even with a low patient load. He's there to be hooked up to meds for the adenovirus, so there's not much roaming around.

It's the time out of the hospital that is most important now. The guest room at Trish's parents place is starting to resemble the hospital room we had on Unit 1: the collages are back up on the walls, there are containers of medical equipment on a desk and his NG tube pump still whirrs away at night.

He loves playing in grandma and grandpa's house, with no shortage of toys, doors to open and our dog Megan to chase after. He's regaining the balance he lost through the bone marrow transplant and even seems to be more vocal - maybe words aren't far off.

The hope of taking him off the tube feeds is reliant on a healthy appetite, which remains a challenge. He'll eat meagre amounts of food at breakfast and lunch, but nothing at dinner. We know we have to remain patient and vigilant about it.

The best news of the week is that he's tested negative for adenovirus. They need a second consecutive negative test to take him off the meds for it and thus not come in to clinic two of the four days per week, so we'll find out next Friday if the workload mercifully lessens going forward.

By the same token, this week has reinforced how exhausting this journey has been. Getting out of hospital was supposed to come with less stress, better rest and more smiles. If anything it's been the opposite. There's no nurse to pop in at 4 a.m. while you sleep and change his diaper. You have to know his exact medicine schedule, which ones you need to wear gloves to prepare, which ones you need to order more of. You have to keep the environment clean. You have to prepare the meals, change his dressing and tend to his broviac line and NG tube.

As parents you do all of these things normally. Transitioning back to it after seven months in the hospital is like having a newborn all over again.
Posted by Sean Rooney at 11:04