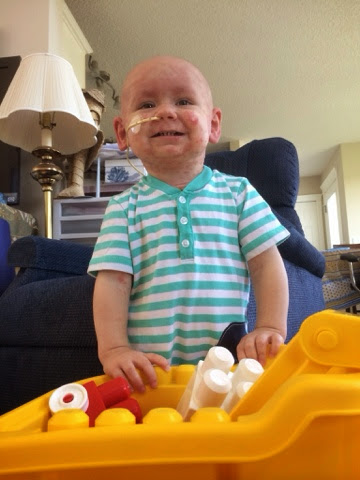 But as one nurse put it to Trish the other day, everybody but him is worried about it.

It doesn't seem to cause him any discomfort. He's more annoyed at being poked and prodded, not allowed to go anywhere and basically in isolation until the doctors decide what to do next.

The first doctor was convinced it was graft versus host disease. But the lack of other telltale symptoms weren't there. Pretty soon there were three doctors in his room at once, all wearing masks in case he had something infectious. They couldn't decide what it was, so they sent Trish and Dom to a dermatologist in downtown Calgary.

The dermatologist couldn't decide either. He did a skin biopsy which came back inconclusive for GVHD, or anything else for that matter.

They delayed starting the steroid cream because it could cause a side effect with another disease he's fighting. But yesterday they finally started it at a low dose, hoping it would at least help.

I'm now being asked to take pictures of soaps and other products in our house. List the ingredients. See if any could cause a reaction like this. Meanwhile I've come down sick - no, I don't have a rash - and won't be going back to Calgary this weekend to see them. It's not worth the risk of making him more sick.

He's not symptomatic enough to stay in hospital, but the rash means he's basically being held captive in Calgary for his own good. We almost hope something else happens which would point to a cause, but then again if he's happy and comfortable we shouldn't complain. It's like medical purgatory.

He did stay in hospital for a few days this week, the result of a fever. Or at least, we thought it was a fever. Trish measured it with the skin thermometer we bought when he was born. Yesterday she went and bought a better (read: more expensive) one because let's face it, him getting a fever is not something we need to play guessing games with. Sure enough the old thermometer showed a fever and the new one, nada. Worth its weight in gold.

What's next? Your guess is as good as the old thermometer's.
Posted by Sean Rooney at 13:26