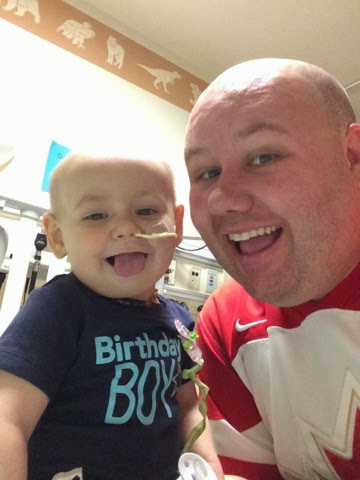 Growing up in Calgary, I never thought much about philanthropy.
I remember my junior high teacher, Ishie Dawood, collecting deposits from cans and making an annual soujourn to Brazil where the money was put to good use.
I remember selling raffle tickets door-to-door to support the sports teams I was on. And collecting pennies at Halloween for Unicef.
Oh, and there's a picture of me dressed up as a (horribly ugly) woman at Mount Royal College's Gender Bender which supported a women's shelter. I didn't even shave my goatee for it.
I didn't do a heck of a lot for charities. It simply wasn't a priority.
Well, priorities change. Life changes. And here I am, two weeks away from participating in a gaming marathon for the second year in a row, ranked eighth among more than 30,000 who are raising money for their respective local children's hospitals.
You may have noticed the page I added to this website a few months ago for Extra Life. A friend of ours, Krista, found out about the charity last year which gets folks to play games of any sort for 24 hours straight and find sponsors to donate money.
Being that Dom was newly diagnosed with AML and pretty much living at the Alberta Children's Hospital, I latched on to Extra Life. In a few short weeks I raised $4,315, shaving my head in the process. We played 25 hours thanks to a daylight savings time change. It felt great to give back what I could. Just as our community had supported us during a tough time, you backed me and the result was tremendous.
When Jeromy Adams, the guy who created Extra Life out of a hospital in Texas, visited the Alberta Children's this spring, Dom was sadly in the ICU. It was serendipitous that I was able to drop in and get involved with what has become the Extra Life Calgary Guild.
The guild set a goal of doubling the 2013 totals of 361 gamers and $65,000 raised in southern Alberta. I knew I could get more folks in Medicine Hat to participate, but didn't think I'd get near the $4,315 from my first year.
Then I met Brayden, a Medicine Hat teenager whose sister spent so much time at the hospital before she died earlier this year. He wanted to do Extra Life in her memory.
Then I met Kye, who is still a patient here but wants to do it even though some days he can't even walk.
Then Dominic's cancer relapsed. And your support has again risen to the challenge.
I decided I'd shave my goatee once I matched last year's total. That happened Friday. But donations keep coming. At $5,000 I said I'd write a special blog post. Here you go. There's no more goals to reach now but to keep pushing and see how much we can get. If you visit my official Extra Life page you'll see what I'm willing to do for future donations.
As for the guild, well, they have nearly 500 people registered. I know at least 30 are from Medicine Hat, including 23 on Team Medicine Hat of which I'm the captain. Team Medicine Hat is 11th out of more than 3,000 Extra Life teams with $8,600 raised as of my writing this post.
On one hand I'm so glad I found out about Extra Life. It has given me something to put my energy into because I have to put faith in the hospital when it comes to Dominic.
But oh, how I wish I didn't know about it at all.
http://www.extra-life.org/participant/seanrooney
Posted by Sean Rooney at 15:26