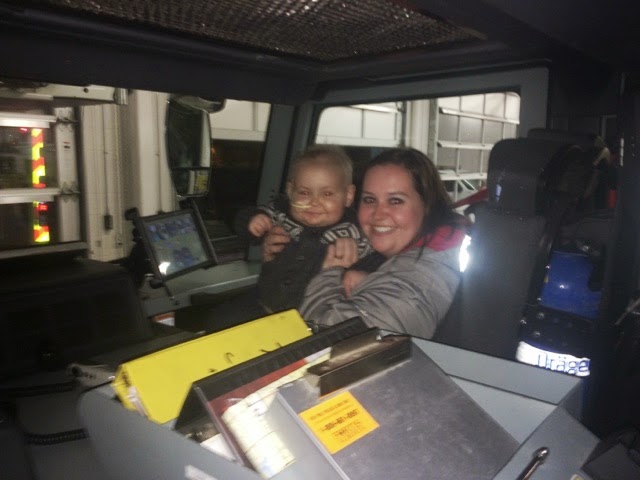 When you don't know how long you've got left, living takes on a new meaning.

For Dominic, who doesn't have any sense of the odds he faces, it's up to us to make memories with him.

I liken it to trying to squeeze a lifetime of love into every day.

Today, we got some extra help with that.

Steven's Run was started 17 years ago by a family whose son had brain cancer. They drove him around to see the Christmas lights and made a big production of it, doing little things along the way to make it special.

Steven couldn't finish the night. By the next Christmas he was gone. So the next year, his brother finished the parts of the night he never did.

And now, every year, they pick a family to give the experience to. This year it was us.

A limousine picked us up along with Dominic's grandparents and auntie Erin. A photographer was there to capture the entire evening so we could sit back and enjoy it. But on the way to Airdrie's festival of lights, we were pulled over by a highway patrolman.

It was a fake stop, though my mom fell for it hook, line and sinker. They presented us with a card and let Dom play in their patrol car, then escorted us, lights flashing, to Airdrie's fire department. It was time for another surprise.

We didn't just get to show him the fire trucks, we got to ride in them. With Dom and Trish in the front seat it was lights and sirens full steam ahead to the festival. Santa and Frosty the Snowman greeted us at the main entrance. We rode in a minature train around the park. Dom giggled and waved and didn't seem to care that it was already past his bedtime.

Back at the fire hall we got to meet the volunteers who make the event happen. Families and friends and folks whose normal jobs are to save lives. And they gave us more presents, plus a spread of snacks that we wound up bringing back to the nurses here on Unit 1.

It was a night we'll never forget.
Posted by Sean Rooney at 01:22