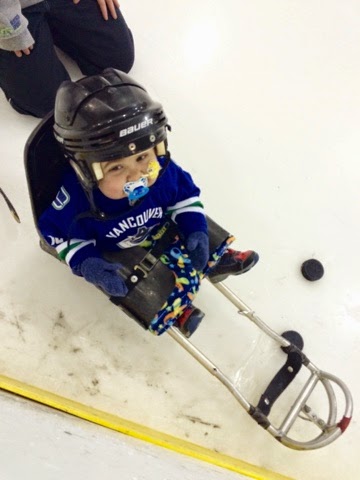 We don't really mean that, but on days like these we have to admit it's pretty crazy to have the opportunities we do. And we wouldn't have them if not for what our son faces.

We'd also happily give all of these moments back to never have heard a diagnosis of leukemia.

Today began with a plane flight in a four-seat Cessna thanks to Kara and Jared Brake. I know Kara through work - she's been at the helm of numerous mutli-sport events since her time playing soccer at Medicine Hat College - while Jared is a pilot. We brought Dominic to Super T Aviation and got an incredible trip above the city.

Kara was joined on the tarmac by Corrie and David Dale, who are doing some amazing things this year. First and foremost they're behind Duel it for the Ride, a fundraiser for the Alberta Cancer Foundation April 18 at the Clarion Hotel. If you have a chance please consider supporting the event (https://www.facebook.com/events/1533776443551275/).

As if that weren't enough, we also had an invite from Tara Chisholm and Derek Whitson. Tara coaches Canada's national women's sledge hockey team, while Derek plays for the men's team that won bronze at the Paralympics in Sochi. They were incredible with Dom and he absolutely loved being on a sledge. He also enjoyed having Tara push him around for nearly an hour and having her brother fetch the pucks he pointed to.

Once he got home tonight he was exhausted. It was like another day from our wish trip, except at home.