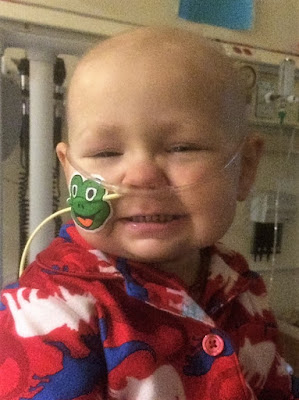 It's late and I can't sleep.

It's late and he won't live.

It's late and we can't look back.

Trish and Dom are at Flames Rotary House again, while I'm at home in Medicine Hat for the work week.

Note: again. He hasn't been there all week. At 1:30 a.m. Saturday he spiked a fever and I put on my clothes, put him in his stroller, waited for a nurse and a security guard and we walked the 500 metres over to the hospital and Unit 1.

He wasn't himself the whole time I was there. He didn't want to walk around, didn't want to play. Just cuddles and some dancing where he sat. As if he knows the end is coming, too.

More antibiotics. More transfusions. On Monday the fever returned, and on Tuesday we found out its source: A fungal infection in his lungs.

With the cancer spreading like wildfire through his blood, nothing will cure the infection now. There's no good white blood cells left. All we can do is slow it down.

So now it's a matter of time. Do we have time for a wish trip to Florida, Disneyworld and Give Kids the World? I don't know. Good people are going to try to make it happen though. They'll try their best.

I wish I had better news.

I wish I had more energy.

I wish he could at least be comfortable for this final ride.

And so we put him on morphine. The drug Trish feared the most. The one which screams death, deprivation, degradation.

And instantly it was too much, as he could barely sit up. His eyes, already puffy from the past week of medications, stayed shut most of the time.

They did finally get back out of hospital, with the rationale that if anything else goes wrong, it's just another 500 metres back there. And at Rotary Flames, there's staff watching him 24/7 so that Trish (and I, when I'm there) can get the rest we so desperately need.

But there's nothing left to do for him.

It's too late for a cure.

It's too late for regret.

But it's never too late to tell him I love him.


It's with this awful news that we have to move forward with something that is positive and started a long time ago. It looks like there will be no good time to announce this, but Trish is helping me up the ante for this year's Extra Life fundraising campaign.

You might remember I've participated in Extra Life, a 24-hour gaming marathon, each of the past two years. Every cent of money donated to my page goes to the Alberta Children's Hospital in Calgary, which primarily serves all of southern Alberta. The things they've done for us are incredible, and have made Dominic's journey so much easier to bear.

I folded Team Medicine Hat into the Extra Life Alberta Children's Hospital team this year. But our sub-team is still strong. And if we meet a couple goals Trish has agreed to do a couple incredible things.

If we can raise $10,000, she'll cut at least a foot of hair off and donate it to a program such as Locks for Love.

Game day is Nov. 7. Please share the following link with everyone you can. Let's give back.

http://www.extra-life.org/participant/rooney
Posted by Sean Rooney at 02:27