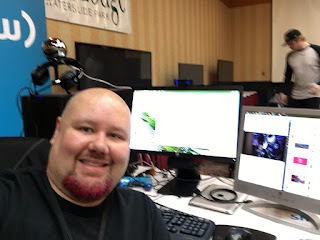 If you told me a year ago I'd be spending 24 hours in a hotel ballroom with dozens of friends playing games... OK I would've said great, let's do it.

But I would've expected Dom would be here with me.

Not physically, at least.

The next day is going to be incredible. We're set up here at the Medicine Hat Lodge, with a half-dozen gigantic TV screens (thanks EasyHome!), a fantastic internet connection (courtesy Krys, Ryan and the good folks at Shaw), selling #dominicstrong shirts and ready to play games on consoles ranging from an original Nintendo (thanks Jace!) to an XBox One, board and card games, and of course whatever I've got on my PC.

Door prizes include an XBox One (thanks Children's Miracle Network and Microsoft!), a Nintendo 3DS XL (thanks Glynn Yuhas!) and gift certificates to Skinny's Smokehouse barbecue (thanks guys!).

At 4 p.m. (Mountain time) Trish is getting her head shaved. It's going to be emotional. She'll hold the ceramic heart she was given when Dom died. They gave him one too. Yesterday hers smashed to the floor and broke. She broke with it.

But I super-glued it back together and it's going to be OK. Our hearts are forever broken, but there's lots of glue around. They will keep beating.

Watch us live at: http://www.twitch.tv/gomerstraw. Donate at http://www.extra-life.org/participant/rooney
Posted by Sean Rooney at 08:11