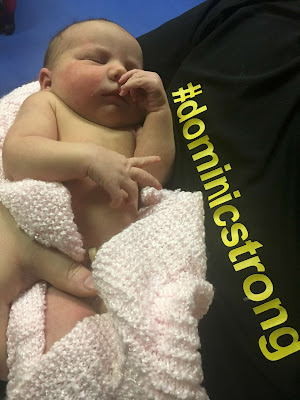 She's got his cheeks, his nose, some of his clothes and all of his ability to be cute.

She's also got an oximeter on her foot at night, ready to alert us if anything goes wrong.

The new normal with Samantha is surprisingly similar to how Dominic was, almost to the point of deja vu. But we still look out the back door and there's his bench, on a spring day overloaded with kids at the playground. His urn still sits atop the mantle. His beads are still displayed prominently.

I'd have thought there would be more sadness, or at least fear, tinged in with all of the love for our new child. Maybe that will come, especially at the 11-month mark when he was diagnosed with leukemia or when she has her first illness. I'm not searching for those feelings though. Maybe I'm too tired for any foreboding. Babies don't tend to sleep very well the first few weeks.

Sometimes this feels like Dom reached down from the heavens and said "you get a do-over." I looked into her eyes last night and felt him there, still unable to speak but smiling, glad I was happy in that moment. All he ever wanted was for people to be happy.

Realistically that's not how it works. There will be hurdles ahead, and we'll get through them just like we got through his problems. But I think our experience has allowed us to take greater comfort in the good times, and worry less about the minor troubles. That sense of perspective never goes away, even as it might lessen over time.

On Friday we took her to a local community centre for a baby social time. We'd taken Dom there often, and sure enough the staff remembered us. We'd donated some things to them and I immediately spotted one - a play mat and pillow for tummy time. One mom talked about going to swim lessons and Trish and I just about squeaked we were so giddy with the idea. Not until she's had her first set of vaccinations though.

Then another woman came up and started asking questions.

"Do you have any other children?" Yes, yes we do.

I know Trish feels bad about answering that question, because some people then feel bad for asking it and want to crawl in a hole. But I almost want them to ask it, because even though it's a bit awkward I'd rather they know why I'm holding Samantha extra tight, or glancing at her more than is normal. I'm not going to buy a bumper sticker that says "rainbow baby on board" but find it easier to get the awkwardness out of the way.

Just as important, I try to normalize the conversation after that by not continuing to talk about Dominic. If someone wants to ask about him, fine, but lingering on the subject can make finding middle ground impossible with someone you've just met.

We all have our own stories. This is ours. Dominic is forever part of it, and this new chapter is proving to be just as exciting.
Posted by Sean Rooney at 13:14