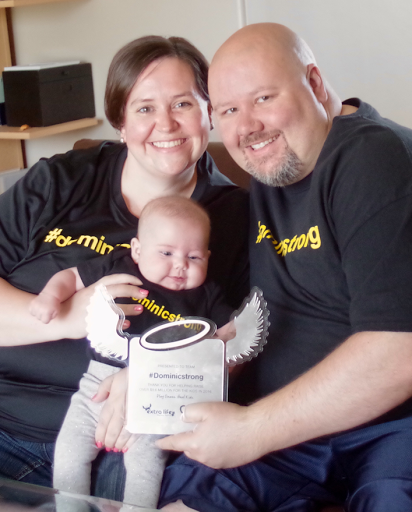 They say baby girls are tougher to handle than their male counterparts.

While that is certainly true in our experience, that's not the only reason this blog has been silent the past two months.

With Samantha one month old, I left for Orlando and the Extra Life United gaming tournament in late March. Work-wise it was a bad time to go, with hockey playoffs going on among a busy local sports scene in Medicine Hat this spring. For her it was tough too, as she wasn't sleeping well, crying a lot, as babies that age tend to do.

But I had looked forward to Orlando for months, had practised my tail off at the six games I was to play, hoping to win some money for the Alberta Children's Hospital.

It didn't happen. And the blog I wrote on the way home was so negative, I didn't actually post it. I'm going to post it now, just before this one, because it's still accurate. But I do blame myself for not dealing with the stress of the weekend better. You'd think someone who's been through what I have would handle things better, but alas I did not. You live, you learn, right?

A lot of things have calmed down since that crazy March. Samantha included. And we've been busy, getting some plans in the works for our Extra Life fundraising for this year.

In April we attended Calgary Expo and I ran a panel about Extra Life, with 75 people turning up to hear all about it. Ex-Calgary Stampeder Jon Cornish established significant nerd cred talking about World of Warcraft and anime, and hopefully we inspired some people to sign up this year.

We've got a new venue lined up for our gaming marathon this year! On Nov. 4, 2017, the #Dominicstrong team will host a 25-hour event at the Beveridge building (Beveridge Landmark Events) - which has a pub-style lower floor called The Cellar perfect for video and board gaming. You can click here or find the event on our Facebook page to indicate whether you'll be attending.

The theme of our Extra Life fundraising this year is going to be bigger and better. The upgraded game day will be part of that. There will again be an online auction, and an event at Hooplas Family Entertainment Centre (mini golf being the centrepiece). We've surpassed US$90,000 raised in four years doing Extra Life for our hospital, and hope to break the six-figure mark. I suppose in Canadian dollars we already have!

A couple weeks ago we got some special items in the mail. A plaque to recognize the nearly US$25,000 the team raised last year, and individual plaques for Trish and I (we each raised about US$7,000 each). Hopefully we can keep the momentum going for many years to come in Dom's name.

Thanks as always for your support.
Posted by Sean Rooney at 17:39