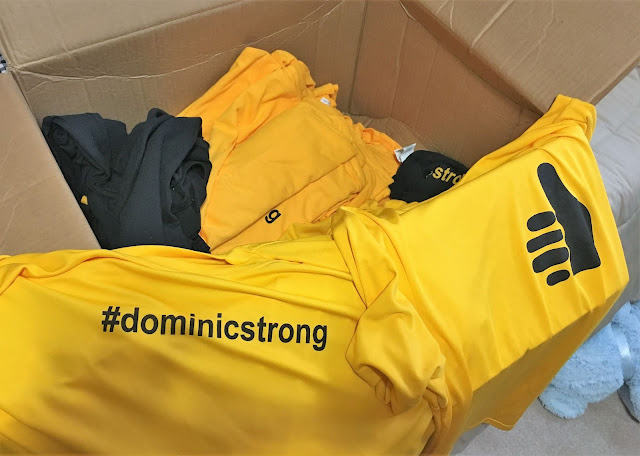 Christmas can be the hardest time of year.

Days are at their shortest, so there's less sunshine. It's cold. And every happy person, every happy family has the potential to remind unhappy people, people who have suffered loss exactly what they're missing.

Some days it's easiest to put your head down and just try to get through it.

Or serendipity occurs and all you can do is thank the universe for what you still do have.

We put the call out for a new order of #Dominicstrong clothing last month. That post has 173 hits as of today, making it by far the least-read thing ever on this blog. I was not optimistic.

For all we do for the Alberta Children's Hospital via Extra Life, this was one thing we wanted to do for Helping Families Handle Cancer, which is a much less-known charity but still so valuable to families in our part of the province.

The order wasn't huge, about 30 items, and when it's all said and done we should be able to donate about $450. And that's fine. That money will be appreciated and used well.

And then I screwed it up. On the invoice sent to us, I didn't see that I was agreeing to cotton shirts, not the dryfit ones we wanted. Black, cotton ladies tank tops instead of the gold, dryfit ones we announced. I had done a poor job of communicating what I wanted.

When the box of clothing arrived, I was mortified. We had no choice but to re-order what we wanted.

Thankfully, Custom ImageWear generously offered to do the corrected order at cost. We paid for it out of pocket and will not be shorting HFHC. Actually, we might be able to give more.

You see, we now have all those incorrect shirts and tank tops. Gold ones with black lettering and logos. But in cotton, and only in the sizes that people had ordered for the dryfit. And some of the people who bought the dryfit ones have anted up and bought the matching cotton ones too.

We will sell the cotton ones for $25 apiece. If you're interested, simply email donations@dominicstrong.com or contact either Trish or I privately and we can let you know what sizes remain.

It was already going to be a quiet Christmas. I'm working Christmas Day for the first time in a while, which is only fair since co-workers have done it regularly, and I got lucky with holidays and off-days a couple times.

We won't have much under the tree because we're going to Orlando in March for Extra Life United, a charity and gaming event we first went to in 2016. It is not cheap to do, and we are grateful Trish's work has agreed to let her take the time off during tax season. Seeing our friends in that community again will be like a late Christmas.

On Sunday we had a bit of Christmas shopping to do. It seemed like around every corner was someone I knew, all of whom had a smile and kind words for us. Got a discount on a board game we have to learn to play for Extra Life United. Dropped by EB Games in the mall where the manager still remembers us and will give me a call once specially-branded Extra Life/Microsoft socks arrive (supporting Children's Miracle Network!).

It got to the point we stopped on a street and a guy came around the corner walking his dog, stopped, so we rolled down our window and chatted.

After shopping, we went to the local Ihop for brunch. At the end of our meal our waitress told us someone had paid our bill, with a message: "Always be Dominicstrong."

Whoever you are, thank you. We're so lucky to have this community. And we hope that the charity work we do can help other families, not just during the holidays but all year long.

By the way, since we started doing Extra Life in 2013, just a month after Dom's leukemia diagnosis, participants under the #Dominicstrong Extra Life banner have raised more than $175,000 (estimate, prior years collected in US dollars). This year's total sits at $24,115 (Canadian). Special thanks to Kevin Braun, whose Nov. 25 game day pushed him to nearly $5,000 alone and ended with him shaving his head and beard!
Posted by Sean Rooney at 13:09