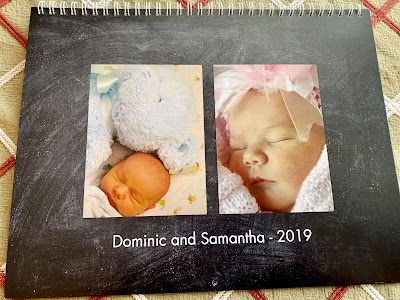 A month before hearing that Dominic was terminal, we had to come up with Christmas gifts for our families.

Given how many amazing photos there were of him, a month-by-month calendar made sense.

From the chubby cheeks when he was born to the omnipresent smile and eventually thumbs-up later, there were no shortage of choices.

It was the 2015 calendar, and until last month it still hung in our house. It was forever December 2015, the photo of him wearing a Santa hat in the main hallway towards Unit 1 at the Alberta Children's Hospital.

Turns out, the calendar still hung in a couple other places. One friend who we'd given one to got new calendars affixed beneath it, recycling the monthly photos of him.

It's never time to move on, but this year we've started to find ways to incorporate Dom into our new life with Samantha. She's started to recognize there's another baby with us in photos around the house, and that it's not her.

So 2019 has the Dominic and Samantha calendar. Photos in each month of both of them, except for their birth months when they get the month for themselves. And September, the month he died, is mainly photos of him. 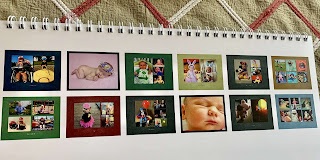 No, this isn't the announcement of some new fundraiser. We're signed up for another year with Extra Life and are anxiously looking forward to the Extra Life United conference and tournament in March. We can even tell you the date for the Medicine Hat Mavericks' Superhero Night - Saturday, July 20! The mini golf tournament will hopefully return, as will the online auction. And there is some early interest in doing a public 24-hour gaming marathon again... but we'd need help to make it happen. If you're interested in taking a leading organizational role, let us know.

We are proud to announce that the apparel sales from December resulted in a $600 donation to Helping Families Handle Cancer! There are still a handful of cotton shirts and tank tops that weren't sold. If you're interested just email donations@dominicstrong.com with what size in what style you're looking for. If we have it, they'll be $25 per item (plus shipping).

Not much other news but hope you've had a good start to the new year.
Posted by Sean Rooney at 18:10