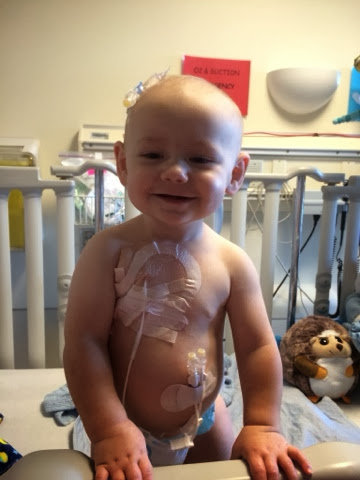 When you're hoping for the best, little things can set you back.
Having stayed back in Medicine Hat for the whole week, my worst fear was that something serious happened with Dom while I was gone.
In retrospect I think I overreacted when Trish texted me Saturday night to say that his broviac line broke for the second time.
When the line breaks, blood leaks out of the line. From all accounts it's a mess. And given my history with fainting and blood, perhaps it's best that I've not been around both times it happened.
Still, I felt helpless. And I missed them already. Not a good combination.
It got a bit worse before it got better. Because the line was broken and Dom still needed IV antibiotics, they had to insert a temporary line elsewhere. And if you remember The Blood Whisperer, you know that finding a vein in the young guy's arm is an exercise in patience and futility.
So, they put the IV in his head. Ugh, I thought. But it turns out he was barely bothered by it at all.
They say kids at this age are incredibly resilient. To see a video of him wearing only a cape and a diaper, IV bobbing around on his head and a mass of tubes stuck to his chest as he dances in the crib is the perfect example of that.
Maybe he was mocking the leukemia. If so, it appears to be working. His blood counts, which took 27 days to recover properly after the first round of chemotherapy, have rebounded even faster since the second round ended Nov. 6. This morning, they recovered enough that we're being discharged in the afternoon.
The timing could hardly be better. I am back in Calgary today as well. The second major fundraiser is in Calgary tomorrow (no, Dominic cannot come! Seriously, think of all of the disease floating around in a group of people that large! Also, I apologize if you can no longer attend). We just found out we're allowed to return to home in Medicine Hat before he has to come back for the third round of chemotherapy.
Trish misses our house. When we video conference, she asks for tours. There's my bed! There's my shower! She hasn't been there since Sept. 11. Neither has Dominic.
We're so incredibly lucky that Dom is doing well. And while the Alberta Children's Hospital is a major reason why, we can't help but think the support we've received has translated into his amazing progress. We can only hope, with appropriate caution, that it continues.
Posted by Sean Rooney at 11:07