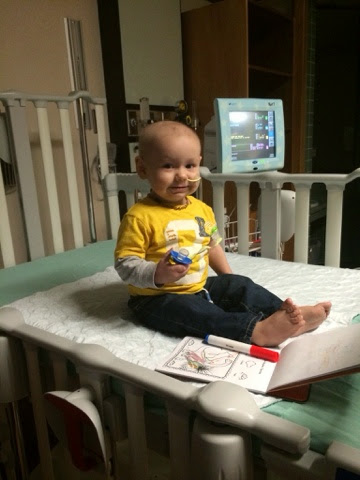 When you go on a holiday, the idea is usually to relax. Get away from it all. Maybe make some memories.

I guess we did all that last week. Not all at once though, and certainly not by the traditional version of a vacation.

With Dominic thankfully back home in Medicine Hat, we got away from the hospital. He's had no serious side effects from the latest round of drugs, so we got to relax. And every day with him is full of memories; there was never any worry for that.

We had friends over to the house and Dominic made about 18 trips up and down his slide, laughing every time and enjoying all of the attention. Another time he dragged everyone to his room and brought out book after book to read.

He's still not eating much but that's a battle we've given up on for now. He'd been around the same weight since he was first diagnosed last September. It's not worth the stress so we switched his tube feeds to provide all the nutrition he requires; his weight has risen as a result.

He doesn't know what the stakes are or what he's facing. He's just as happy as he always is, so that's the lead we all follow.

On Monday and Thursday he went to Medicine Hat's hospital to get blood drawn and check his counts. On Tuesday he was in Calgary's Alberta Children's Hospital for a routine check-up, but was home for dinner. Even though I had to work it was great to come home to my family every night and wake up to them every morning. It almost felt normal.

Then we got the blood count numbers Thursday. His platelets were low.

We didn't plan to be back in Calgary for another few days, so arrangements were made to get him a platelet transfusion at home in Medicine Hat.

Easy, right? Not for the hospital here. Upon arriving Friday, we were told not only had the platelets not arrived from Calgary, nobody even knew where they were.

"How do you lose platelets?" asked our head nurse in Calgary. "I've never even heard of that before!"

It wasn't the end of the world this time. His platelets were low but not zero. They couriered a cab to get the platelets to him by the evening. But imagine if getting his blood products were a life and death situation. How can we trust the Medicine Hat hospital going forward?

We suspect we won't have to worry about it. We're taking a week in Calgary and he gets his second set of chemo-type drugs and then the GVHD-inducing T-cells immediately after.

Until then, we'll call this our vacation.