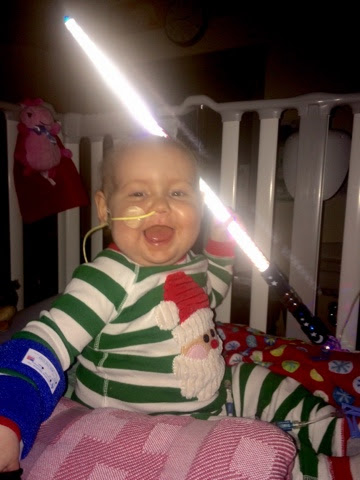 He's been in Calgary for all but 15 days since August. Been isolated in his room for all but 36 hours of his time in hospital.

But the way he laughs, my goodness, you'd swear he had not a care in the world.

A family member brought him back a drum major's baton (a mace) from Disneyworld last week. It glows fancy colours, but it's far too big for him to use as intended. But turn it around and what does it resemble? A light sabre.

Get too close to the boy and you're going to get whacked. Even if you say, accurately, "I'm your father." This weekend's lesson: Why Han shot first.

The sound that comes from him is worth the beatdown. It's somewhere between pure joy and hyperventilation. It's glorious. It's carefree and innocent and it's love.

What it belies is the splint on his leg (during the day), now another on his arm (at night), and the growing amount of something in his brain. The latest MRI shows it's bigger than two weeks ago. 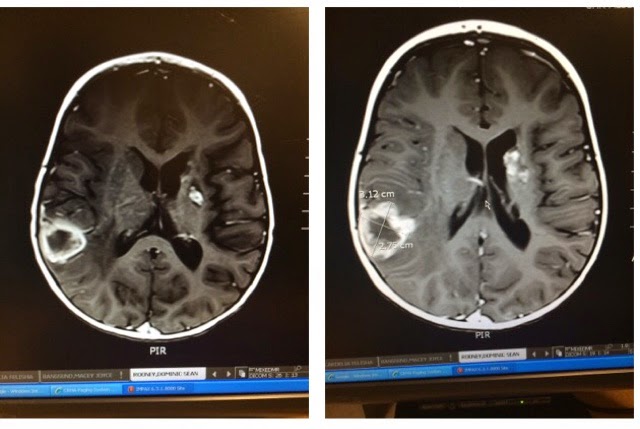 And yet we still await a decision on whether he'll get a brain biopsy. The hospital's neurosurgeon was on vacation this week, but we're told the biopsy could happen Wednesday if the decision is made to go ahead with it. That, of course, is weighed against the likelihood that Dom's leukemia will relapse after he achieved remission in late November.

Until then, we wait. And we play. He even had a visit from Santa today, though the big guy can't come in the room with Dom on isolation.

I took an extra day off work to surprise Trish here at the hospital and give her an extra night off. Apparently I'm going to be surprised Sunday by an event planned for Dominic and our family. All I know so far is it involves a limousine, Christmas lights and I don't have to worry about taking photos - someone will do it for us.

Memories like these make all of this hardship a little easier to take.
Posted by Sean Rooney at 00:27