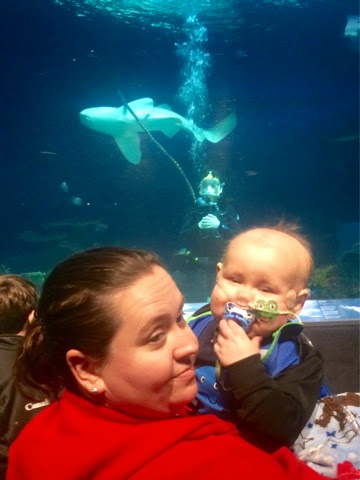 So much colour. So much life. Even as today's trip to the Vancouver Aquarium put Dominic's vibrance in to comparison with creatures of the deep, so too did it remind us of their fragility.
If you saw him without tubes going up his nose for oxygen and food, Dom seems like an average two-year-old. Maybe a bit chubby. Full of spunk. He doesn't speak but communicates incredibly well.
But when you have to cart the oxygen condenser wherever he goes, it's tough for anyone to think he's normal.
Like the dolphins, he's been trained well. He smiles for cameras, gives fist bumps and obeys commands with the discipline of a soldier.
Like a resting frog when he naps, he looks for the camoflauge of the nearest blanket or shoulder.
Our behind-the-scenes tour was the product of a small-world connection. I'd done a story on the late Mary Matthiessen, who used to work for Medicine Hat College's athletics department, being inducted into the Alberta Colleges Athletic Association hall of fame. I interviewed her daughter, Christina, who happens to know Amber Leeb, a Medicine Hat native who now works at the world-renowned aquarium.
Amber put us in touch with the external relations department and Fergal Dempsey, who met us and introduced us to Kirsten, an incredible guide who led us all around the facility and then had to excuse herself as she had to go dive in a tank filled with sharks and rays.
She started by showing Dominic a plethora of jellyfish, snails, starfish and urchins. He loved touching the prickly urchins, but never more than once. There was always something new and exciting in the next tank. 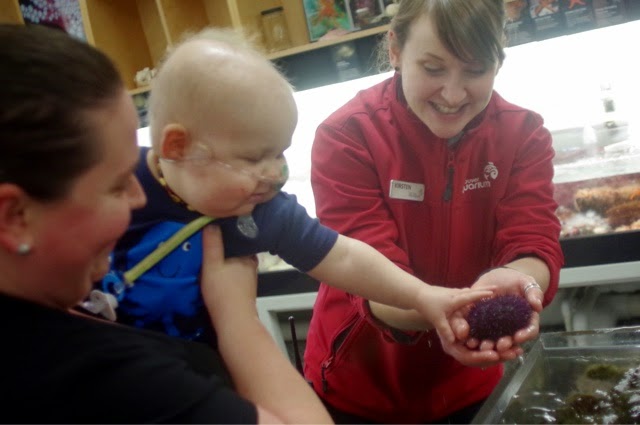 It was the kind of tour you could only dream of. I can only imagine what he thought of it, but his smiles said all we needed to know.
As the dolphins leaped out of the water on cue for a daily presentation, Fergal returned to our side. There's a sea lion rescue going on, he said, one of many they do in a year. Not all of them survive.
All it takes is a little piece of plastic garbage in the ocean to put such an animal's life in danger. Who knows how it got there.
All it takes is one cancerous cell to start a chain reaction that brought us here as well. But we're grateful for everyone who has helped along the way.
Posted by Sean Rooney at 01:56