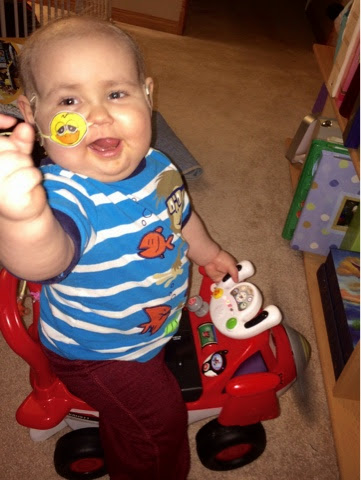 Six weeks after we were first told Dominic's leukemia is back for the final time, we sometimes have to pinch ourselves to believe that's his prognosis.

A child saw his feeding tubes and mask the other night and asked what was wrong. He's got cancer, I said. He's very sick.

Another person asked how he was doing. How long has it been since you heard anything, I asked. Then I had to tell them his cancer is terminal.

Every time we have to tell someone, we feel bad for having to say it. Why can't everyone just know, and then we don't have to deliver the news again? But that's not how things go.

Then we look at him, and he's seemingly no worse off than he was before Christmas. He's still getting platelet transfusions, but they're down to once every four or five days. And the leukemia still hasn't shown up in his blood.

That last point has our doctors actually confused. Before you start crying from the mountaintops that it's a miracle, please understand that we've been on that roller coaster, and it does go down again. There's no medical reason it won't return, it just seems to be doing so more slowly than anyone expected. But just in case, we're heading back to Calgary in a couple weeks to test his bone marrow — which was where it showed up in December.

We had tried to get him off of oxygen, but that backfired a bit. He started to get cranky this week, until we put the oxygen tubes back on him full-time. Suddenly he had way more energy.

I'd love to give more news but the truth is there's not much else to say. We've been swimming a couple more times, he's had a fairly steady stream of friends stopping by, and I'm fairly exhausted from long days between home and work.

Every day is a gift.