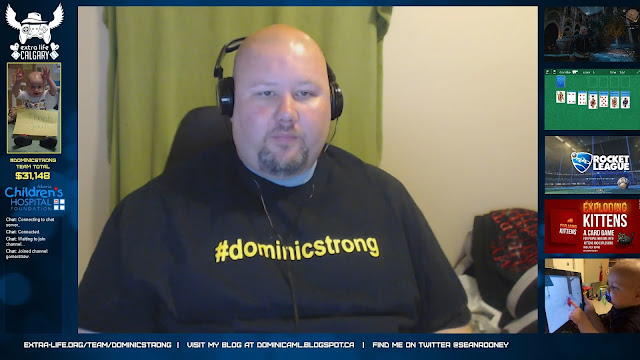 They say the first year is the toughest.

Saturday marked a month. It snuck up, the realization hitting me as I recorded a video about why I participate in Extra Life. Good timing? More emotion is good if you want to have an impact, I guess.

Canadian Thanksgiving is next Monday. It's also Oct. 12, which would've been his third birthday. Trish wondered if we should have a cake. No, I said. It'd be the most depressing cake in the history of cakes.

Then we'll have Halloween (we won't be handing out candy to all the cute kids), Christmas (already booked a trip to Vegas!), and all the rest.

We can't avoid everything, however. Hiding from it will only delay the reality, and sometimes it's good to face reality so you can move forward.

I'm still not sure we expected to face it like this, however.

A couple weeks ago I got an email from a vice president of the Canadian branch of Children's Miracle Network. So inspired are they by Dominic's story, they want to tell it at a special conference in February - and they want Trish and I to be there for it.

It's called Momentum, and it happens once a year. Every children's hospital in North America sends a representative along with a champion child from their region. It's a celebration of all the good these places do. I like to think Dom would've been perfect for it (had he been older and able to speak). But it is what it is.

Extra Life, the gaming charity which I will participate in Nov. 7-8 with funds raised for the Alberta Children's Hospital, got involved in Momentum last year too. They started Extra Life United, a gaming tournament at which you can win even more money for your local hospital. It's also a chance for Extra Life folks to get together, celebrate and be inspired by the kids there for the larger conference.

I'll register for United today. I had a special invite to it last year but of course didn't go because of Dom's situation.

This is all wonderful. Except for one thing.

The conference is in Orlando.

Yep. We're going back to Orlando. We're going to finish his wish trip, see his star at Give Kids the World, go to Universal Studios and a couple other places he didn't get to visit.

We're going to cry. We'll also have fun. We'll be scared to go but also excited.

It'll be part of our journey. Again.

United isn't the only big Extra Life news we have this week. Our #Dominicstrong team has surpassed US$30,000, meaning not only will Trish shave her head Nov. 7, so too will the Russell family.

Additionally, I've somehow agreed to get my back waxed if we reach US$45,000. Go ahead, make me regret it!

Trish and I will also colour our hair (her remaining hair, my goatee) for 10 days prior to the gaming marathon based on any donations made during a set period of time. Watch for it on social media.

Auction items are starting to go up on the Facebook group, with the online bidding happening Oct. 30-Nov. 1. The stuff there is amazing. You can start to scout it out now - there will be a total of more than 80 items.

Helping Families Handle Cancer got a $2,100 cheque from #Dominicstrong from the sale of a batch of clothing, which was great. Even better was their annual art auction which raised more than $33,000. We will definitely do more for them next year.
Posted by Sean Rooney at 02:19