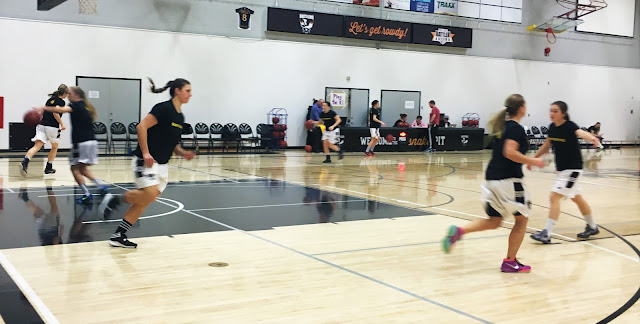 It was a few months later than first planned, but Saturday's #Dominicstrong night at Medicine Hat College was everything we hoped it would be.

We set up a table promoting Extra Life and raised $216. Lots of friends came out to say hi and hung around to watch the host Rattlers basketball teams sweep Ambrose University's Lions.

When women's basketball coach Jason McLester inquired about getting shirts for the whole team last year, we were amazed. It probably didn't hurt that the colours we chose for them, black with gold lettering, happen to be the same colours as the Rattlers' uniforms. 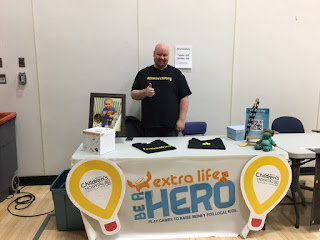 On Saturday, they wore those shirts for the warm-up. And Jason and the coaches wore theirs for the entire game.

They said afterwards that they'd dedicated the game to Dom. Given the result, they might want to dedicate more games to people who inspire them: The final score was 96-39.

Before the men's game (they won 94-75), everyone stopped what they were doing and watched the video presentation I put together reflecting on Dominic's journey. I said then I'd post it on YouTube that night - providing I could get rid of some copyright problems.

Well, I wasn't able to get rid of the copyright problems. Long story. I won't bore you with the details, but I wound up deciding the fastest way to get the video online was to switch out some of the music.

I made this video as my own memorial to him. It's got video and photos we've never previously shared. Among them is a video sent to us from Dominic's primary nurse, Ellen.

We didn't hear from Ellen for a while after Dom died. She and our primary doctor, Tony, couldn't make it to the memorial service. But they were arguably the two most important people from the hospital in his life. We needed to hear from them.

Then, an email. Professionals in an environment like a children's hospital have to maintain some distance from their patients, but that doesn't mean they don't care. Far from it. If a child dies, they can't let it affect their work going forward. It takes a special kind of person to work in an environment like that.

Ellen sent us a video and a couple photos to remind us Dom is important to her, too. The ones you see in the video are her writing #Dominicstrong in the sand when she went home to Newfoundland. For Trish and I, they are among the most powerful in the nine-minute memorial.

Everyone has ways of showing support. For some it's financial. For others, it's sharing a memory, or just saying hi. Or dedicating a performance, or writing in the sand.

Whatever you support, showing it means everything.