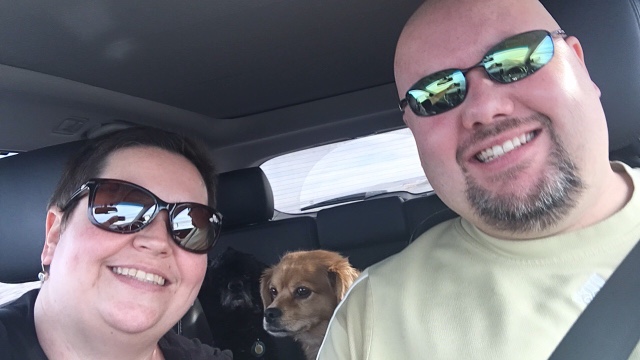 "The race is long, and in the end, it's only with yourself."

Sometimes it doesn't so much matter when things happen as that they happen at all. So it is that we've had an unexpectedly busy week here, and things are only going to get crazier as we get closer to Orlando.

First, Trish was supposed to go back to work in May, after tax season was done and getting back in the swing of things was a bit less stressful after three-and-a-half years away from accounting.

She'd kept busy by volunteering, both at the Medicine Hat Food Bank and the Alberta Winter Games office (Medicine Hat is hosting the biannual games Feb. 13-16). And we started going to a gym every morning, and she went curling most Friday nights.

Instead, a too-good-to-pass-up job offer prompted her to switch firms and start this past Monday. Sometimes, it's best to just jump in the deep end, and Trish is probably the only one stressing about doing so. Anyone who knows her is aware she could navigate a proverbial swim in a pool full of sharks.

Her being back at work has its negatives, such as no more working out together and my having to cook most of our meals. But I think it's ultimately for the best; financially we couldn't have continued with a one-income household forever. And it gives her something new and exciting to focus on.

I think most people who deal with loss like ours find ways of coping. Some go to counselling, others keep busy with new projects or drink themselves into a stupor. I never said all the ways of coping were good ideas.

I thought I might write more about it, but more often than not I've just been a big ball of depression. That's compounded by how badly things are in the newspaper business, with jobs and papers being cut almost daily across the country.

But we've got our friends, many of whom we saw in Calgary last weekend for the first time in months. And we sometimes forget how many friends we have that we never see at all.

One thing that has kept me busy in a good way is an event coming up next week. A few months ago when the #Dominicstrong movement was in full force, the Medicine Hat College women's basketball team all bought shirts and pledged to wear them in warm-up for a game day dedicated to his memory. Instead, that got delayed in order to focus on a women's volleyball player with cancer (who I am thrilled to see has finished her chemotherapy and appears to be doing great, all things considered).

It wasn't the first time the Rattlers had shown us support. Back when he was still in hospital, Dom got a visit from the men's basketball team. A signed jersey from them is now displayed in our basement.

The Rattlers' #Dominicstrong day will now happen next Saturday, Feb. 6, with the women's game at 6 p.m. and the men playing at 8 p.m., both against Calgary's Ambrose University College. Between games, so around 7:30 p.m., we will show a video I've put together telling Dominic's story. I'll share it with everyone - presuming YouTube doesn't put a copyright block on it - later that night. Needless to say, have Kleenex handy.

Speaking of which, we had to get a couple shirts done up the other week and found a great guy in town - Jeff Barrett of Customs Print and Stitch. Our former supplier stopped returning phone calls when shirts we'd ordered for Christmas never showed up. Jeff got them done and then donated them to us. Suffice to say we know where we're going for future orders!

And just like that, it's February. Three weeks and we're in Orlando again.

I wouldn't say time is exactly flying, but it never does stop. I'm OK with that.
Posted by Sean Rooney at 11:56