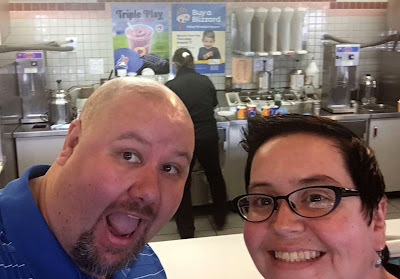 Normally when I write a blog I have one thing in mind. Today I've got about 10.

Why haven't I written about them before now? I haven't been doing well. The last couple months have been awful and I feel like I'm failing to hang on. Hopefully by focusing on Extra Life this next little while I'll gain some momentum, but staying positive has not been easy.

Let's start with Extra Life. On Saturday, Aug. 27 at Medicine Hat College we'll be running a booth during the Medicine Hat Fan Expo, spreading the word about the gaming charity we are both participating in this year. We'll even do a Pokewalk (group of people playing Pokemon Go for an hour) from 11 a.m.-noon.

We're also looking for donations on both our Extra Life pages (http://www.extra-life.org/participant/sean and http://www.extra-life.org/participant/trish) and donations for the #Dominicstrong online auction which is set for Sept. 29-Oct. 2 through the Facebook page. We've had a couple items donated so far and hope for a bunch more in order to raise a ton of money for the Alberta Children's Hospital that weekend.

Last week we piggybacked off the Children's Miracle Network Hospitals fundraiser with Dairy Queen to help our Extra Life fundraising. Miracle Treat Day let folks buy a Blizzard and have money go to CMNH, but I upped the ante by offering to deliver a Blizzard to anyone in Medicine Hat who donated to my Extra Life page.

Sure enough, one kind soul asked that I bring a Blizzard to someone who cared for Dominic in hospital. So I did. Kara, one of his main nurses when he stayed in Medicine Hat, was happy to receive it. Lots of love was spread that day. Another person we thought of but didn't know how to get in touch with wound up being at the Dairy Queen while we were there. It was serendipitous.

Today we got to listen to our baby's heartbeat for the first time. I've included a four-second clip here but basically, all is well on that front. Well, Trish's nausea isn't great for her, but it's exactly how she was with Dominic. We should be so lucky to have another pregnancy like his.

When we arranged to have a memorial bench in the green belt near our house for Dominic, there were a couple things to play on nearby. Then, six weeks ago, workers showed up and began digging just outside our back gate.
For a while we just waited to see what was going on. Then I finally called the city to ask. They were putting a playground there.
Even now, I'm a bit upset. We lost a child and now the city puts something mere metres away from our property so that all the happy kids can laugh and play right in front of us. Why not build it 75 metres further away where the memorial bench and other equipment is?
In any case, it's fine now. Trish is pregnant, they moved the memorial bench and the playground itself is essentially now a memorial. Years down the road it'll be great to have a place our child can enjoy, so close to home.

We've made many friends as a result of what Dominic went through, but seeing another family deal with a similar journey to ours is incredibly sad.
Alexander Sox is four years old. He's got brain cancer. His family just got back from a wish trip to Orlando when they were told he's terminal.
I wish we didn't know the kinds of things they're dealing with. I wish nobody did. It's another reminder that the charity work we do is so needed to support kids like him.

Days before Trish's first ultrasound, our dog Megan was having some issues. Her cheek looked infected and her eyes weren't doing well.
Turns out she has cancer. She's got weeks to live. We got her when she was four and have had her for eight years and certainly knew she was getting old, but for it to happen now is a kick in the gut. She's doing pretty well all things considered, but the tumour won't be getting any smaller and when she stops eating or seems in too much pain, we'll have to say goodbye.

In a couple weeks both of my sisters will ride through Medicine Hat as part of the Sears National Kids Cancer Ride. Erin had committed to the ride a while ago, and has raised more than $25,000. Then Shannon decided to join her. She's already raised $15,000. They both did provincial rides, which will essentially be a tune-up for the cross-country trek which runs Sept. 7-24. Visit http://searsnationalkidscancerride.com/ to learn more and donate.
Posted by Sean Rooney at 15:08