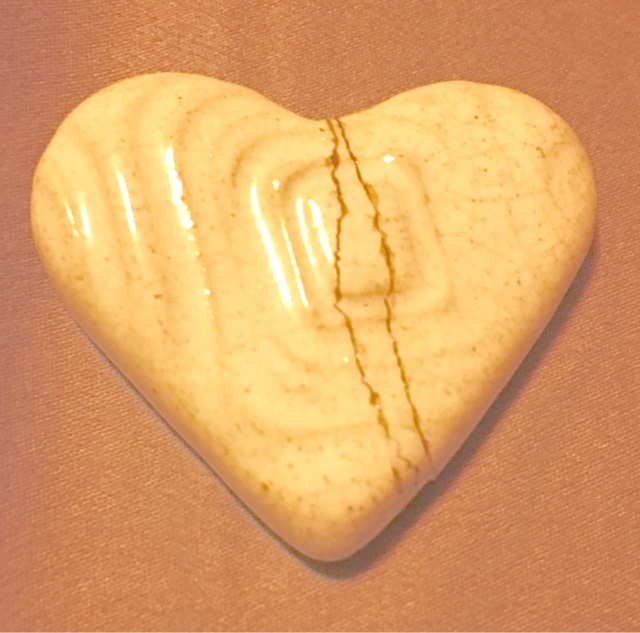 Some people know and some don't. Some have seen me absent mindly playing with it and asked what it was. Some I've explained the whole story to, and some I just say it's like a worry stone that I have when I think about Dominic.

Here is the whole story…

When Dominic passed away some people from the hospice care team were there with us. They checked for vitals and confirmed that Dominic had passed. They told us to take all the time we wanted and sent in a couple of nurses to bath Dom and get him dressed in new clothes that I picked out for him. While the nurses were doing that, a lady with the hospice team came in and showed me a bag of little ceramic hearts. They were different colours and had different little designs in them. She explained that I could pick out two hearts if I wanted to. One was to be given to Dominic and one for me to keep. It was a way for me to have something small that I could keep on me as a way to connect with Dom. I choose two that were the most alike. After the nurses were finished dressing Dom, I sat and placed the heart I was going to keep in Dom's hand and the one for him in my hand. I held his hand for an hour or so and put all of my love into his little ceramic heart. As long as I held his hand, it didn't get cold.

Finally I asked Sean to call them in and tell them we were ready for the funeral home to come and get Dom. When they arrived with their little stretcher I picked up Dom and his favourite blanket from his hospital bed and placed him on the stretcher. You could tell the guy was a little startled that I had moved Dom, but this was the final time I would carry him. I switched the heart in our hands and put his in his hand and kissed him one final time. As we watched them take him away, I held so hard onto my little heart.

The next day we went to the funeral home to sign the papers and make decisions. The funeral director handed us a little bag with the ceramic heart in it and Dominic's teething necklace. He had always had a teething necklace since he was just little and I felt he should keep it with him. We asked if it could be placed with the ceramic heart in with his ashes, so he would have them. They agreed.

A couple of months later Sean knew how attached I was to this little heart and worried that I might lose it and how I would react to that. He suggested I keep it in my jewelry box or see about putting it on a necklace or something. I said nope and that I wouldn't lose it. Well so far I haven't lost it and keep it on me at all times.

I did have a scary moment where, as you can see if you look at it, that I dropped it and it broke in half. I was devastated and fell apart. I called Sean and he came running up stairs and took it from me and said he would fix it. He took it downstairs and glued it back together for me. He said "now the little heart is broken, just like yours, but it can be glued back together." I don't know what I would have done without him in that moment. I couldn't think of anything when it had broken and I just fell apart. But luckily Sean was there to pick me up and put me back together again like he has so many times in the past year.

The point of this long story is to show you one more of the amazingly simple, but important things that these hospitals do to take care of the families of sick kids. It is a simple cheap little ceramic heart, but it means the world to me. It is something I will always have and carry with me forever. These hospitals are so important for the big moments and well as these little simple moments.

This is another reason we do what we do to support these hospitals. Costs like the little ceramic hearts are not covered by the government budgets. Although this little heart did not costs a lot of money, this is only one example of the many little things that they do and the cost do add up. Without fundraisers like Extra-Life and the amazing programs they support I may never of been given this little ceramic heart at a time when I needed something I could hold on to to give me strength.