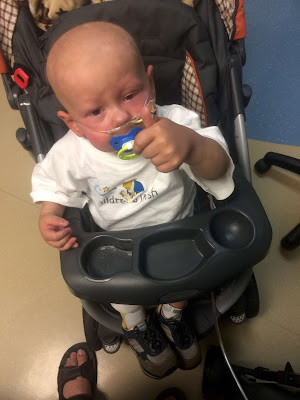 "As my memory rests,
But never forgets what I lost,
Wake me up when September ends"
- Green Day

I was so proud when I figured out how to turn off Facebook's memories.

Silly me, thinking I could avoid any of it.

As September 3 rushes forward, everybody seems to have Dominic on their mind again. But he's never wavered from ours. His light has remained on in his room for a full year, that dim blue glowing on the urn in his crib.

Soon it'll be time to move it and make room for his brother or sister.

Children play at the park where his memorial bench sits, their laughter alternately heartbreaking or heartwarming to hear. But we haven't spent much time on our deck this summer anyways.

I don't want to remember what happened on this day a year ago. I don't want to replay the 911 call, seeing my son turn blue as we diverted to a closer hospital, the staff there so completely useless Trish had to draw blood from him. Or the doctor at our final destination telling us this was it, and saying our goodbyes before he found some more energy to hang on for the night.

His last FaceTime chat with his aunt Erin, who today is on her way to Vancouver with my other sister Shannon to begin a cross-country bike tour in support of childhood cancer. All these lasts. No more firsts.

I'm happy with the memories I have of my son. A year ago yesterday he had those two hours at Disney World, living up what turned out to be the last day he ever saw outside a hospital. When his blood counts came back that afternoon we were told we wouldn't have to come back the next day for a transfusion. We'd head to Universal Studios instead.

So it didn't happen. It's OK - he was done. He did so well, getting us all the way out there. He earned those angel wings.

His time may be over, but his legacy is not. September is childhood cancer month, and our charity efforts are building momentum. It's how we parent Dominic now - raising awareness and giving back to places that take care of kids and their families.

We've had some more loss recently. Our dog, Megan, succumbed to cancer herself. I guess Dom can take her for walks again. We had Meg for ten years, and she was a lot of work to take care of in recent months. It was her time, and now we're more thankful than ever we got our other dog Rifle a couple of years ago. Having no dogs and no kids in the house would've been hard on us.

One quick reminder: Next Sunday, Sept. 11 is the Second Annual #Dominicstrong Memorial Charity Golf Day at Hooplas in Medicine Hat. It'll be a ton of fun and all money raised will go towards our Extra Life campaign for the Alberta Children's Hospital. Food trucks, mini golf, and much more.
Posted by Sean Rooney at 01:36