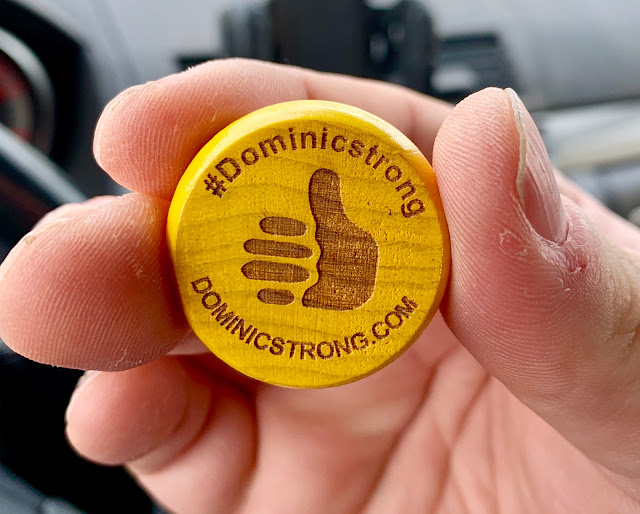 It was no secret that we were going to Extra Life United this week in Orlando but we did manage to keep one amazing thing hidden until it started.

As a convention and gaming tournament, ELU brings together incredible people from around the world. Every year things change but a few traditions have grown: the rock, paper, scissors challenge involving every participant; a ton of folks wearing onesies; and pin trading.

The pin trading started because the champion kids at the larger Children’s Miracle Network conference (of which ELU is a part) used to include a night where everyone went around and met the champions, who sat dutifully for a couple hectic hours handing out pins and information at their respective booths in a massive ballroom.

Extra Life participants wanted to give something back to the kids. And what they had left, they traded amongst themselves. 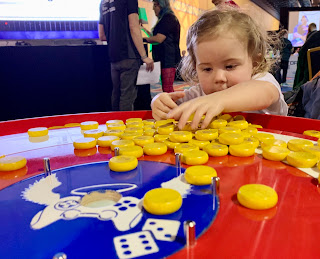 In 2016 we had ribbons left over from Dom’s memorial service and business cards to give out. In 2017 we got special dice made with the #Dominicstrong logo, graciously donated by the gaming company Chessex. Some of the extras later wound up in our annual online auctions.

We wanted something unique again this year and inspiration came from Extra Life United 2018, which we weren’t able to attend. The traditional Canadian tabletop game crokinole became a big deal that year with a couple attendees (namely Michael Oliver) bringing boards to the conference to play on.

I contacted Crokinole Depot, based in Ontario, with the idea to get 200 of the wooden discs used in the game. They generously gave them for the cost of shipping.

I then went to Dean Harnack at Trophy and Engraving World with an idea. His business has donated many of the items in our auctions (with the magnificent word art from Natalie Long) and Dean had our logo engraved on each of the crokinole discs!

We had fun surprising Michael and some of the other crokinole enthusiasts this week, and will be giving out many more when we meet  champion kids and their families Thursday.

And you can bet there will be ways you can get your hands on full sets of the special discs. In fact, how about we give a set of 12 away right now! Donate at least $5 to either Trish (http://www.extra-life.org/participant/trish) or Sean’s (http://www.extra-life.org/participant/sean) Extra Life page between now and Friday and you’ll be entered into a random draw. We will cover the cost of shipping.

Look for a final update on how we did in the tournament Saturday once it’s all over and we are on our way home. And keep watching our social media feeds as we might make an appearance on the tournament’s live stream (http://twitch.tv/extralife4kids) Thursday!
Posted by Sean Rooney at 22:03