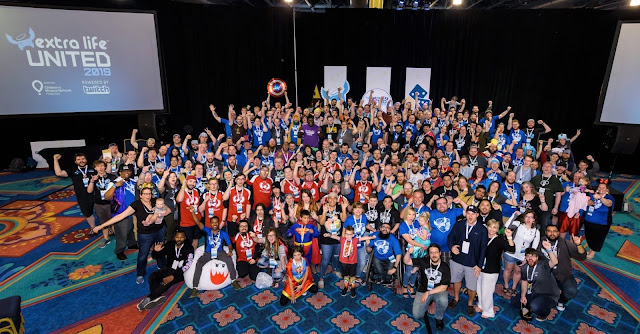 Extra Life United is over for another year, we're back home to our regular lives and wishing we could still be there.

As always, it was a wonderful experience.

First, the highlights. We got to meet Hudson, the Alberta Children's Hospital champion, whose story of perseverance and bravery dealing with mental health is an inspiration.

It turns out he first shared his story in 2014 during the hospital's radiothon: the one where Dominic was the poster boy. 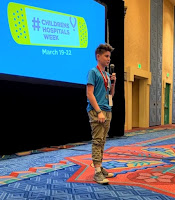 I wish we could've spent more time meeting more champion kids - we only wound up getting proper introductions to about 10 of the two dozen or so there - but we appreciated the time we had. There were two sessions of meeting these kids and their parents, and after their stories were told we were able to ask some of our own questions. We might have induced a few tears asking the parents to explain to the audience how the impact of their situations lasts far beyond being initially healed. We are well aware of the fact childhood cancer survivors often have long-term debilitating side effects due to the chemotherapy they endured. 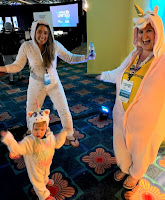 The week was a chance to meet the champions, but also friends we've made through Extra Life. None had ever met Samantha before, and oh my, was she a tour de force! From the opening-night onesie party to running all around the convention hallways, she and Trish definitely earned their Friday morning at the pool while I went to a few last panels.

It was at one of those panels where I had perhaps my most moving moment of the week. Although we have a ton of friends at Extra Life United, the total number of gamers and volunteers there totaled more than 250. For every friend there was a complete stranger. It's inevitable, and it's great that United continues to grow (there were less than 100 competitors when we first went in 2016).

So with that in mind, I wasn't really sure how much our story resonated with the Extra Life community. But in a panel about how to tell your why (introducing others to Extra Life), no less than four people in the room referenced Dominic as something that got them motivated to play games and heal kids. People from all over North America. People who are playing for their own hospitals, their own sick kids, and Dominic made an impact on them.

We were asked to pair off. I did with Mike, who'd played a game with me the night before but didn't know my story. And as I told it, I pretty much burst in to tears. It doesn't happen that often anymore, as I've told our story a zillion times. But it does still hurt. And knowing it has made a difference gives us strength to keep on telling it.

Speaking of the games, both Trish and I had some success! We each won a quarter-final table of the board game Azul, then finished second at our respective semifinal tables, earning $500 each for our hospital. It was discovered later I should've won my semifinal but that's another story for another time. We also played challenge station (non-tournament) games and Trish's name was drawn to compete on stage for another $100, and we wound up totalling US$1,320 in all for the hospital. I placed 42nd and Trish 45th overall among the 200-plus competitors.

When it was all said and done, a big group of us went to Epcot. There I spotted another one of the champion kids - this one who I hadn't met but had heard of. Allison is the champion for Cincinnati Children's, and she's had terrible kidney problems growing up. She also is transgender, which is something I don't think I've ever seen with a champion kid. The bravery of being so open and sharing her story is incredible, and I basically fanboyed on her, asked for a picture, the works. Then I sent it to another Extra Life friend, Joey, who couldn't be at United this year because he's having gender reassignment surgery in two weeks' time.

There are so many stories like this that come out of Extra Life United every year, and many more I just don't have the time to write about right now. But suffice it to say we're all caught up on hugs until the next time we're back, 2022.
Posted by Sean Rooney at 18:18