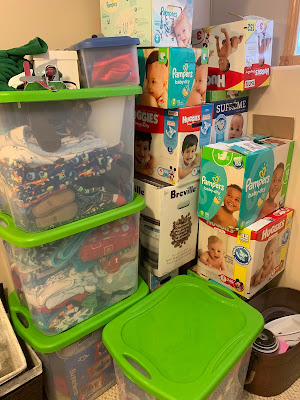 Father's Day has come and gone for another year, and I'm feeling a little melancholy.

It's not because the card I got was from one child who's here and one who's not, though that's not far off.

When Dominic died, one of the first things we did was go through the scads of toys he had, pick which ones to keep and what to give away to charities.

We probably gave away $1,000 worth of stuff that Christmas, and the funny thing is I've seen some of it as we've gone to various places with Samantha. She spent time as a toddler on a play mat we gave away to a local parent centre, while I've seen other things around and noticed the room immediately seemed dusty.

His old medical supplies got packed up and what hadn't been used yet got redistributed through a parents group. Whenever I see a kid with a tube stuck to their face with a lion or a duck, I think of Dominic.

But his clothes? They got boxed up and loaded into a spare room in our house. There were probably 20 boxes, stacked nearly to the ceiling, in that little room: we never had the time or energy to go through it.

We finally did it Saturday. And yeah, most of it was destined for the second-hand store. But there were a few things we kept.

The first pair of pyjamas he wore after being admitted, with fire engines on them. Some superhero clothes that will look great on Samantha when we do the Mavericks' Superhero Night July 20. Some shoes and a couple hats. A wonderful crocheted version of Dominic, complete with an AFO on his leg, tubes in his chest and in his nose. What a wonderful tool to teach her about her brother.

Some items brought back memories. The furry brown snowsuit Trish put him in when she had to take him to get radiation on his brain at the Foothills Hospital. The radiation mask itself. The hat he wore when he matched my dad in a 'yep, they're related' photo we took. So many pyjamas because Dom basically lived in a hospital bed for most of his two years on this Earth.

And then we hauled them to the car, drove them to second-hand stores and they were gone.

This came on the same weekend we took the crib-side off Samantha's bed - something we'd never done for Dominic of course. It's about to be potty training time and that means she needs to be able to get out of bed in the middle of the night: She never has climbed out of the crib, though we are certain she could've if she wanted to.

With a cancer-free two-year-old in the house, we are basically living the life we should've when Dom turned that age. It's all new territory, from talking to worrying about what she is and isn't eating, what she can and can't get in to, marking off taller heights on the same chart we used for our son.

As we do, we get further and further from the life we did have with him. It's OK; we love our daughter as strongly as we ever loved our son, and his memory is always there with us moving forward. But the boxes are gone, soon to find new homes. It was an odd combination of freedom and sadness to see them go.
Posted by Sean Rooney at 09:47