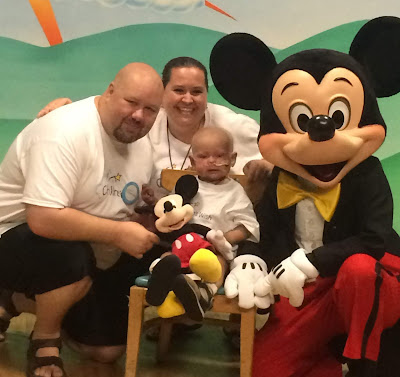 The memories aren't the same, but the pain certainly is.

Four years ago today we watched as Dominic took his final breath. Trish held his hand to keep it from going cold. We made the worst phone calls imaginable to family and friends, crying along with them.

I vaguely remember driving the rental van to a random hotel we were to stay at until his ashes were ready to come home. Then spending the rest of the day lying on hotel beds, reading hundreds of messages and seeing thousands of dollars get donated through my Extra Life page as per our request on that day's blog.

All week we've been re-sharing the blog entries from that fateful wish trip. We read them ourselves at this time every year, and any time we think of him. I'm not usually a big fan of forcing it on anybody, but sometimes you need the support.

People do move on, but we now have two kids - one of them's just not here physically. Samantha's the age he was when he died, and has started to recognize him in photos. There's daddy, mommy... and Dominic. She doesn't know why Dominic is in those photos, but she does know he's important enough to be named.

He's still everywhere to us. We look out behind our house and there's his bench. Anytime someone gives a thumbs up, I think of him. A random photo of someone else's sick kid, with one of the animal stickers for their NG tube - Dominic had those. The Darth Vader pajamas of his now fit her, and she's started to treat his light sabre/baton as a weapon, rather than the vacuum she originally thought it was.

But the story I tell when asking for donations isn't as overwhelming, and certainly more succinct than it used to be. Now it's simply "we do this in memory of our son." You might get a "he died during his wish trip" if I'm being particularly verbose.

And you know, the people who donated before, they still donate. Because it is a good cause. Because they're good people. And because maybe, just maybe, they remember him too. Selfishly, I sometimes think remembering him means more than the donations themselves.

September is Childhood Cancer Awareness Month. It's the most important month of our year - the #Dominicstrong mini-golf tournament is Sept. 15 at Hooplas (register now at hooplas.ca) and the online auction through our Facebook group is Sept. 27-29.

Thank you for paying attention and giving Dominic a bit of your time.
Posted by Sean Rooney at 20:11