I've been to enough charity golf tournaments to know that it's all about getting lots of companies together to raise big money.
But we've found you can do great things with smaller numbers too. And the impact can be just as worthy. 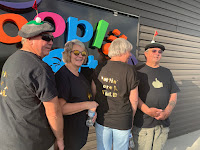 When our friend Amber Dewar approached us after Dominic's death wanting to do a fundraiser through Hooplas Family Entertainment Centre - which her family owns - we were honoured. But I'm not sure we thought it would be bigger the fifth time out than that first, incredibly emotional September day.
But there we were Sunday as four- or even five-person teams filled all 18 holes in Dom's memory, raising money for the Alberta Children's Hospital via Extra Life. 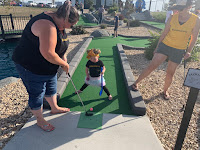 Extra Life, of course, is a gaming charity. Most people associate it with video or board games, but mini golf is a game too, gosh darnit! And a fun one that pretty much anybody can play.
In its original incarnation the day at Hooplas was just that - a day during which a portion of every green fee went to the cause. A couple years ago that changed to a tournament, with prizes for best team score and everything.
As an outdoor course, the weather has had a big impact on the event. Poor weather for a couple years kept folks from coming out, and we even moved the date to be earlier last year in hopes we'd get more people.
Well, it was 32 degrees Celsius out there Sunday, and the numbers show it.
We are proud to announce that this year's #Dominicstrong Charity Mini Golf Tournament raised $1,653! With Schwab and Co. Chartered Accountants sponsoring and Skinny's Smoke House BBQ providing dinner for all 75 of us, it was a massive success.
From all the folks proudly wearing their #Dominicstrong shirts to the team that made their own special Golf for the Gold shirts, it was a good-looking group. We had special holes forcing some to use marshmallows for a hole, or playing while blindfolded, and while I can't speak for everyone, I sure had a lot of fun! Even if Trish beat me.