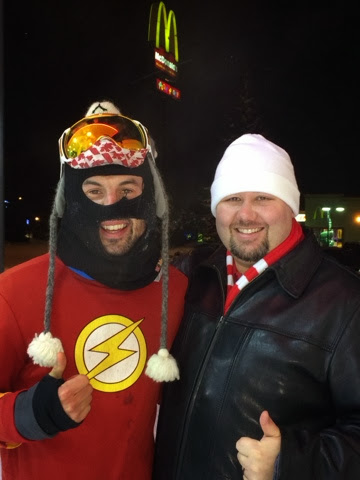 Rarely do my work and personal lives collide, but my meeting last night with British adventurer Jamie McDonald was perhaps written in the stars.

Jamie, 27, grew up with immune system and spinal cord problems and spent the first nine years of his life in a children's hospital.

When he finally got out, all he wanted to do was move.

Last year he rode a bicycle from Thailand to England, raising money for the groups that cared for him when he was young. When he arrived home he rested a couple days, then attempted a world record for continuously riding a stationary bike. He lasted more than 13 days, setting the new mark at 290 hours and 18 minutes.

What next? McDonald went to St. John's, Nfld. in March and started running across Canada.

On Tuesday, Dec. 3, 2013 - 269 days later - he arrived in Medicine Hat. He's raised more than $65,000 thus far, spreading the money out to numerous children's hospitals along the way, including the Alberta Children's Hospital where Dominic is.

Lots of people have traversed the country, led by the dream that Terry Fox had in 1980. Fox's fateful journey - he only made it part of the way before cancer returned - continues to inspire but McDonald says he didn't know the story.

He does now. And I was lucky enough to share Dominic's story with him as well thanks to a stroke of luck.

I was supposed to cover a high school basketball game last night. But the team from Taber cancelled, because the blizzard we've had this week has made driving treacherous. I suddenly had some spare time.

I'd known about Jamie but typically these aren't the kind of stories we do in the sports section. I hoped to meet him but tried to have someone else in the newsroom do the story.

The cancellation changed all of that. You can read my story here.

Space limitations on the page meant I didn't get to expound on Jamie's past, but one of the most interesting bits I left out was about the movie Forrest Gump. I'd read an interesting article about whether the fictional character's running back and forth across the U.S. was possible and when Jamie referenced Gump in answering one of my questions, it made me relate back to the point of motivation.

Jamie's been lacking motivation lately. I think some people wanted me to meet him because Dominic's story might help in that regard. But Gump ran without purpose. And when I asked Jamie how he's been able to keep going, he said not thinking or planning ahead was a huge factor.


One of the first things you notice about Jamie is that he wears a super hero outfit: The Flash. And wouldn't you know it, that's the same lightning bolt that Dominic has on the cape someone made him.


He plans to get to Calgary in a couple weeks. He'd like to meet Dominic. And he's going to need a lot more support to get there. Visit www.jamiemcdonald.org/ for more information.
Posted by Sean Rooney at 11:25