This would've been the end 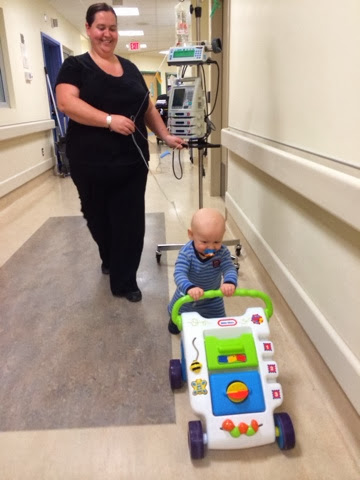 It's been exactly four months since our journey began. Four months ago tonight I was sleeping in the hospital equivalent of a beach chair, complete with an ottoman that wouldn't stay in one spot because of the slick flooring in the room. Thinking to myself I have no idea what's ahead, and how scary it was.

The ottoman was a moving target. You'd put your feet on it and it would slide. When it didn't slide, the top was so slick your feet would slip off the sides. I eventually wrapped it in part of the blanket I was under; not that I was going to rest much anyhow, as my crooked neck foretold.

Our treatment plan was a bit like that ottoman. When it was first laid out to us it showed four rounds of chemotherapy. When you factored in recovery times between them they were roughly a month each. And sure enough, Dominic finished his last dose of mitoxantrone as I started writing tonight.

This was to be the denouement of our story. But things like cancer have a way of sliding from the script. So while we're glad to be done this chapter, there's now a second book on the shelf by the name of bone marrow transplant. We've picked it up and read the cover notes so far, scanned the chapter names. In a couple weeks we'll start turning the pages one-by-one.

Dominic's eating has wavered this week, which was surprising because that problem hadn't shown up until chemo was finished in the previous three rounds. As the drugs take his white blood cells down to zero the next few days we expect plenty of nausea, but hopefully he can weather the storm and then get the counts going back up.

It's crazy to think his weight is literally what it was back in September. He's a bit taller and no doubt was a bit puffier with fluid back then, but it's a reminder how cancer treatment sets a young child back. Many parents with older children have told us of how their kids regress psychologically, wanting mom or dad in the room constantly, and it's clear there are physical regressions too.

Dominic continues to fight the physical stuff, getting better at walking every day. But I'm still waiting for him to call me something other than 'momma,' which he calls everybody right now. The fact we can worry about these little milestones is a testament to how well he's doing otherwise.

We've met some new friends this week, including a family whose little one was just diagnosed with ALL (acute lymphoblastic leukemia) and is Dominic's age. Their attitude is incredible for being so new to the situation, and reminds us of what we went through.

We also learned that an older child who was in the unit left last week and died on Saturday at their home. Death and its ramifications isn't something we've seen much of on the unit; I suspect staff wants to shield the negativity of it from other patients lest it become a psychological disease of its own. Positive thinking, we've learned, is a huge part of battling cancer.

Tonight would've marked the end of Dominic's treatment. It could've been something to celebrate, but instead it's just another chapter mark. And you know what, that's OK. Summer is just a few months away and is a much better time for a party. And I've figured out how to keep my feet on that ridiculous ottoman.
Posted by Sean Rooney at 01:55