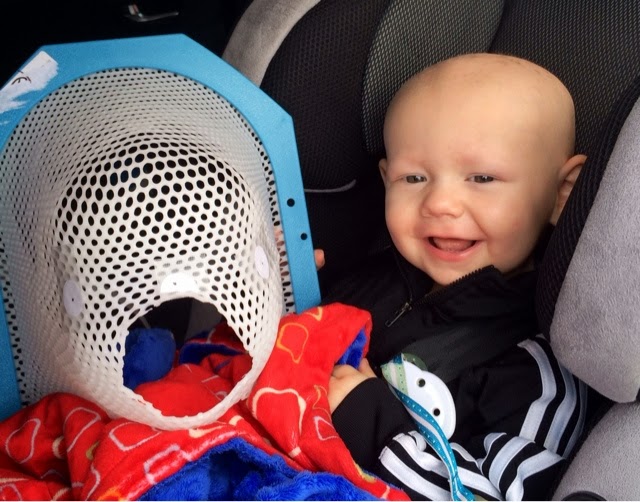 Another bit of good news, a sobering bit of bad. You'd think we'd be used to it by now, but the roller coaster still provides the same gut-wrenching feeling on the way down.

Trish and Dominic will return to Medicine Hat today through Monday for their last time here until at least June. He had his fourth and final dose of cranium-centric radiation, complete with a mask they had to make for him to wear and once again, he was put to sleep to do it.

As we've come to expect he's handled the unusual week like the champion he is, now picking up friends at the Tom Baker Cancer Centre at the Foothills Hospital. He clearly gets the charm from his mother and I'm trying to learn from it, but a big bald guy randomly giggling and smiling at strangers may not have the intended effect.

We were told he might lose his appetite as a side effect and sure enough he barely touched dinner Thursday at my parents' house. The NG feeding tube is almost sure to make another appearance when he goes in for the pre-bone marrow transplant chemotherapy next week.

A most unwelcome and surprising reappearance also revealed itself. His stool sample showed signs of the adenovirus which had helped keep him in isolation last month. While it was an annoyance then, we're now told it could be far more serious now.

The thing about a bone marrow transplant versus the already nasty chemotherapy Dominic endured since September is that the goal is to knock his white blood cells - be they leukemic or otherwise - even further than prior treatment was able to do. That's why kids who get the transplants are in isolation for the first while regardless of whether they have a virus. If they were to contract one it could prove fatal.

At first glance the course of action seems obvious: wait to do the transplant. But the thing is, the adenovirus could be dead but still just randomly showing up in his stool. The doctors say they can't tell the difference between the live virus and the dead one. So long as it doesn't move into his blood or lungs, the virus isn't a problem.

If it does, however, and if he has zero white blood cells around at the time to fight it off, it could kill him.

So now we're gambling. But it's a case of damned if you do and damned if you don't. On one hand we have cancer, which we're aiming to defeat. On the other we have that virus. Since our primary goal is to beat cancer we're going ahead and just hoping the adenovirus stays dormant.

Remember there was good news? Tests this week show Dominic continues to beat his cancer, with another declaration of remission from his bone marrow biopsy which was done Monday. But as our primary doctor has warned before, cancer is like an iceberg. You don't know and can't properly test for what's under the surface. Given the rare subtype of Acute Myeloid Leukemia that Dominic has (the 7-12 chromosome), we have chosen under advice of our team at the Alberta Children's Hospital to be more aggressive and this is one of the associated risks of that.

We're going to enjoy the weekend, and with cautious optimism he's going in to start what we hope will be his last round of chemotherapy Tuesday.

Here's to continued good luck.
Posted by Sean Rooney at 00:31