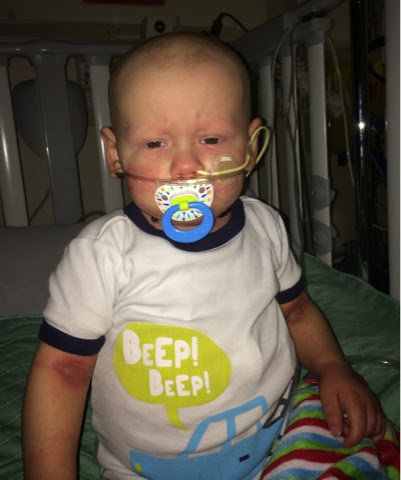 On Tuesday it was decided that Dominic's kidney function was almost back to normal, meaning he could stop getting the dopamine which had spurred it on.

As it turns out, dopamine was the only drug he was on that could only be administered in the ICU. With it out of the picture he was free to go home. His hospital home, at least.

Nurses on Unit 1 did happy dances when they saw Dominic return. He's still hooked up to as many cords and monitors as he was in intensive care, but it's a blessing to have the familiar setting of Room 1110 - adorned with pictures and filled with his toys, clothes and all the other niceties we couldn't bring to the ICU.

His weight is still up past 12 kilograms as we wait for The Italian Drug to start breaking down the blood clots in his liver, but he's off a constant morphine drip and is slowly coming around. He still sleeps most of the day but we played with a counting and singing app on my phone when I arrived today.

I also got to kiss and hold him for the first time in nearly two weeks. Last week when he wound up in the ICU I was sick and had to wear a mask. It was a huge relief.

It's funny, if this liver issue is the worst side effect he has, we've been pretty lucky. He's technically been in remission from his leukemia ever since the first round of chemotherapy and his bone marrow transplant is a success so far. The liver problem is a result of some of the drugs and procedures he had done surrounding the transplant, but the blood switch itself couldn't be going better.

How do we know this? They do a periodic test of his blood to see what percentage of it matches his donor. If you get 95 per cent or higher donor cells that means your body isn't rejecting them yet. Dominic got 100 per cent.

Granted, some kids get 100 per cent for a while and then, without warning, reject the transplant anyhow. That's why you have to stay within a half hour of the hospital for the first 100 days. If it's going to fail, that's the most likely time for it to happen.

But things are looking up. Being back on Unit 1 is exactly what we all needed.

Edit: Some more good news, he sat up and ate a cheezie for the first time in weeks
Posted by Sean Rooney at 15:56