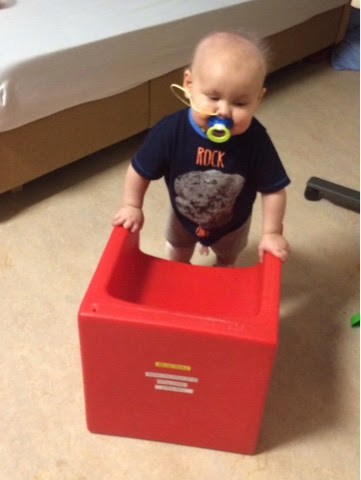 Of course we'd get terrible news the day after our unforgettable experience.

I'm back in Medicine Hat tonight, because we're not doing a brain biopsy Wednesday. We're not doing a biopsy because the hospital's top neurosurgeon is convinced he knows what's going on in Dominic's head.

He thinks it's a tumour.

My initial reaction to that news was that this is it. Cancel the drugs, because the leukemia's going to win.

But the doctors explained it's not that cut and dry. It's not good, and his prognosis is still poor, but it doesn't mean our last attempt at treatment failed.

The T-cells that caused graft versus host disease that have Dominic in a sort of remission only targeted his bone marrow. Unlike traditional chemotherapy, however, they don't do anything for his brain and spine. The body is set up to keep the circulatory system apart from the central nervous system, so it's possible the leukemia causing problems in his head can be wiped out separately from the stuff in the rest of his body.

Most people's first thought is OK, he'll still need brain surgery to remove the tumour. Not so fast. Because Dominic's blood counts remain low - he's received 21 platelet transfusions in the last month - you can't just cut open his head without a major risk of a fatal hemorrhage. Even if you bump up his platelets, they keep falling off and as soon as they do, the risk is too great.

The neurologist also thinks there are smaller, hard-to-see tumours on the other side of his brain. Ones you couldn't exactly cut out anyhow.

So he's going to need radiation. Lots of it.

Instead of trying to figure out for sure with a biopsy, this week will now be spent preparing for how to treat it. He'll have another MRI, and we'll find out the ugly details of what we can expect and when.

If he does survive, his future with the effects of radiation will include stunted growth, cognitive issues, and lots of therapy.

But he's a fighter. We're still fighting, at least until the doctors tell us there's no point. And they made sure to say that while this is all uncharted territory from a medical standpoint, they're not ready to call it quits either.