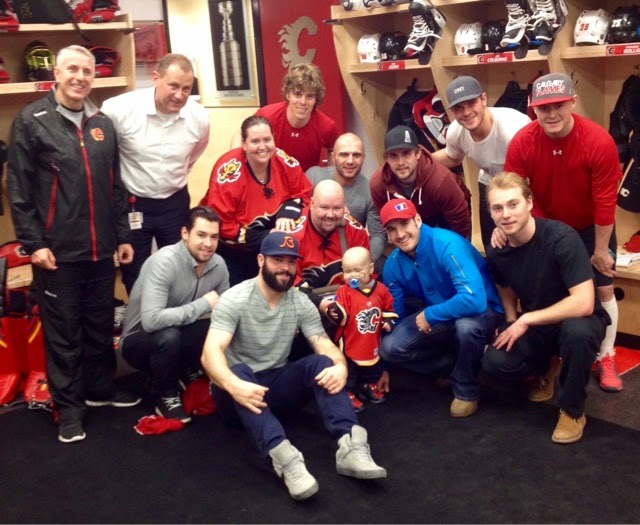 The joke last week when we went to a Vancouver Canucks game was that the only jerseys we had were for the Calgary Flames.

It turns out more than one NHL squad is on Team Dominic.

Following our return to Calgary - with fresh-fallen snow and sub-zero temperatures - there was another special meeting awaiting us. On Monday morning we took him to Scotiabank Saddledome to watch the Flames skate.

Blake Heynen, the team's assistant community relations manager, greeted us with all sorts of team gear. Dom spent most of the time opening and closing the folding arena chairs, despite his father's insistence that the on-ice drills were equally entertaining.

Blake then led us into the dressing room, where goalie Jonas Hiller was getting his pads off. Before long a jersey with Dom's name appeared, then a stream of players. And, of course, a Sharpie. Johnny Gaudreau signed a puck. Captain Mark Giordano and ex-Medicine Hat Tiger Kris Russell were among the hands we shook.

Many high fives and fist bumps later, we posed for photos. Told some of the guys his story. Joe Colbourne - who had visited Dom in hospital last year - remembered him.

I couldn't help but notice the words prominently emblazoned above the locker room stalls as we stood there: "It's all about commitment." I misread the last word to be community. Maybe I look too hard sometimes for inspiration.
Dom smiled and laughed, and ensured they're all on his team no matter how much longer he's with us. 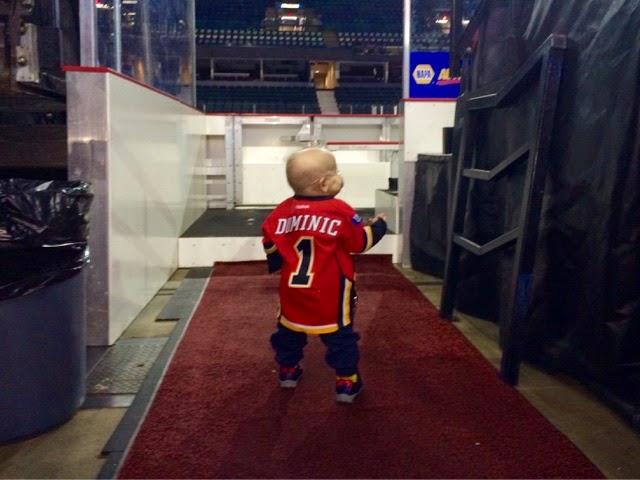