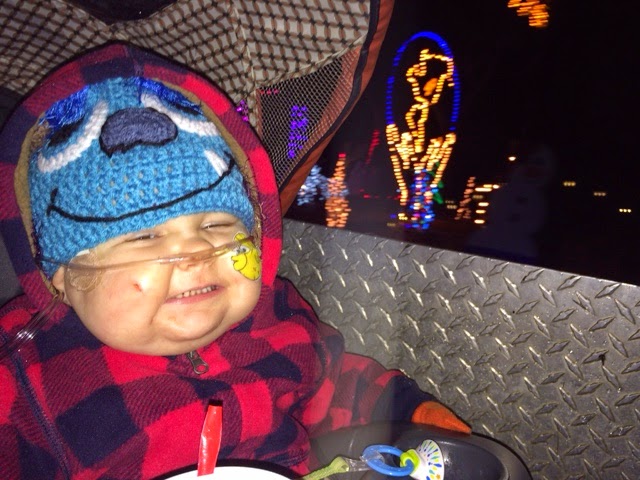 His NG pump broke late on a Saturday night, so Trish called the B.C. Children's Hospital, went and got a new one.

Simple problems. With all we've learned, they're easy to solve.

After a six-hour first day at the hospital, we hoped things would improve. They did. Today we were in and out within three hours, getting the platelets he was supposed to receive a day earlier. He napped for half the time there, allowing us to spend the rest of the day doing what we wanted.

The day started with a visit with family friends over breakfast. After hospital, we had a nice lunch, and later on visited a holiday light display in Stanley Park. All the while we were reminded why we chose Vancouver for his wish trip — we walked around with umbrellas, not gloves or toques. It's not cold enough for snow here. It's the warmest weather we could find in Canada in January. We might not see the sun, but we'll take it knowing we'd be freezing our butts off back home.

The hotel room is nice. We got a suite with a separate bedroom so that he can sleep in there while we watch TV and have a drink or two in the evening. The view's not bad from the balcony and there's a kitchinette.

Is this Disneyland? No. But it's a home away from home, and it's great in its own way.