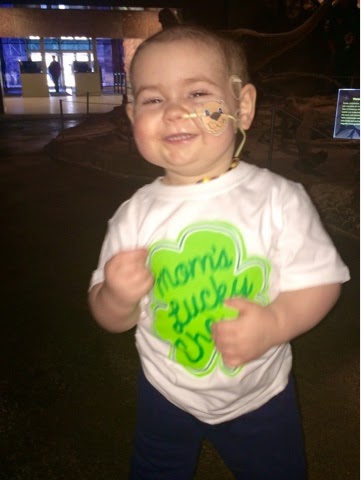 If you've ever wondered why blood collection agencies are constantly asking for donations, consider our son.

Alive for 30 months, in treatment for leukemia for 19, Dominic is a poster boy for why you should give (if they'll let you).

His first transfusions happened Sept. 13, 2013. He got two sets of platelets and one of hemoglobin that awful first full day in hospital.

Since then, he's had hundreds more. At some point, his body started building up antibodies to regular blood products, which we realized when he was needing platelets every single day a few months ago.

So instead the doctors set him up with a special type of blood matched to him specifically.

Right away he went from needing transfusions daily to needing them every three or four days. Blood services people would literally call up the people who matched him and ask them to donate regularly. It has quite literally saved his life, time and time again.

When Dom got the added stem cells (which were frozen from last year's bone marrow donor), the hope was he'd be able to generate more platelets on his own. If he's going to recover completely, his body's going to have to learn to make them on its own. And those incredible donors will hopefully get a break.

Well, this week we took him in for his usual blood test, expecting to need platelets as it had been four days. We transfuse when the number drops below 40; regular counts for you or I would be in the 150-300 range.

Not this time. His number was 73. They told us to come back two days later.

It'll be six days between transfusions this time. It feels like the stem cells are working.

There are side effects to this boost in blood production. Energy, for instance. Dom's been up at 8 a.m. lately. We tell him to go back to sleep because we're used to a kid who's been waking at 10.

His energy level is up, but so have the frequency of his tantrums. Again, he's two. And besides, the smiles still outnumber the tears.

We're also starting to think ahead. A children's development specialist, Linda, and speech therapist, Brad, visited this week for an hour. They played, interacted, all the while asking us questions so they could get up to speed. He might not talk or eat like other kids but it's hardly a surprise.

At one point Brad put down his clipboard and said "just so you know, my official report is going to say Dominic is going to score low for his age."

Otherwise they were very happy with how he's doing, all things considered. And they were glad to see we're starting to put him in more developmental situations on our own as well.

He has kid's music class on Saturdays. This past Sunday, we went to a friend's birthday party for the first time in two years. It was at a gymnastics club; Trish is going to sign him up for gym class.

We had family in from Kelowna the rest of the week and went swimming, among other things. All week he was attached at the hip to his 13-year-old cousin, which was a nice break for mom and dad (but the teenager is spent).

Linda even mentioned the possibility of going to preschool this fall. No, I said, I don't get along well with others.

We have started planning as if he's going to live, as opposed to living in the moment as we've been doing the past 19 months. How crazy is that.