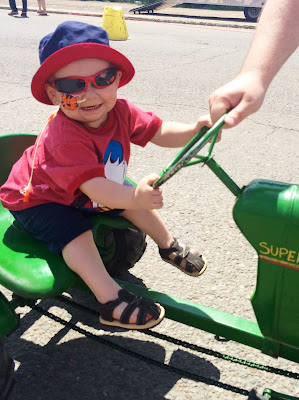 So here we are, in June.

Who would've thought that back in December?

At the moment it's tough, but given what the prognosis was it's downright spectacular.

After getting a blood product to help his platelet counts plus adding chemotherapy to keep the leukemia at bay a bit longer, Dominic has had an up-and-down few weeks. Things have worked a bit, but he's still in every three days for platelet transfusions and it's hard to plan much.

But we have. We took him out to Spectrum, a downtown festival in Medicine Hat, where he loved riding (read: having me push him around on) a pedal tractor. He's been to gymnastics class. At home, he's got a tricycle (that we push him around on). And he's enjoyed watching mommy and daddy play slow pitch with their friends on a couple occasions. Daddy could use a push around the base paths sometimes.

That's not to say it's all been smiles and giggles. We don't really take pictures of the down times, like this week, because that's not what we want to remember when he's gone.

At first he had a bad night. Threw up his feeding tube. Then he wouldn't stop crying. Drooling constantly, a bit of a fever. As soon as Day 2 of it started we brought him in to Medicine Hat Regional Hospital where he's always admitted anyhow.

The hope is it's teething, specifically molars. That would explain the constant irritability and the drool, which would be fine if it weren't leaking on to his dressing which is there to protect his broviac line.

The fear is it's the cancer, which had dropped down significantly with the chemo but rose again on Friday.

Doctors will look at a different type of chemo on Monday or Tuesday, but we fear every test result anyhow. That he's admitted to hospital just means there will be more of them. They did X-rays, listened to his chest, all the usual stuff. Put him on antibiotics in case it's a cold, which his body can't possibly fight at this point.

Side note, he also got prescribed something which never in my life would I have thought to buy for a two-year-old boy. See, all the chemotherapy means his pee and poo is toxic. When it sits in his diaper it can be bad for his skin. We have to use latex gloves to change him. And then his genitals got a bit red.

I go to the pharmacy where they tell me a new prescription has just arrived.

Yes, Canesten. And let me tell you, it works like a charm. Fresh as a daisy, that boy's unmentionables are. I may pick him up some Summer's Eve just to be sure.

Man, the stories we would have to tell at his wedding.

He'll miss a wedding today because of his latest hospital visit, incidentally his first overnight stay here in Medicine Hat. We have to keep reminding ourselves of all the things he has been able to do. Trish went to a child's funeral last week - one we'd met while in Calgary. There's no more procedures or tests or hospital stays for that family to concern themselves with, but I know they'd endure infinitely more of them in a heartbeat if it meant not being where they are now.

No doubt, being admitted isn't great. But at times like this we're glad to have the help we do.

P.S. - Metro Calgary's Jennifer Friesen interviewed us for a story on Helping Families Handle Cancer, a charity which has helped us so much over the past two years. Please consider help them help families like ours with a donation.
Posted by Sean Rooney at 01:22