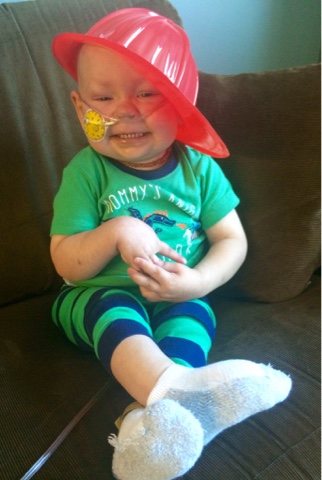 There's no way to describe the past week other than to call it a miracle.

When I came to Calgary 10 days ago, all indications were that it was near the end for Dominic. The leukemia was spiralling out of control, his liver and spleen were enlarged and we put him on morphine.

No wish trip. No comfort. No hope.

Then he had a good day. And two good days. A trip to a show. Then the Airdrie fire department brought a truck, mascot Sparky and a photographer Thursday. He's going to be in their calendar benefiting the Leukemia and Lymphoma Society.

Friday was better than Thursday. Even though we spent eight hours in hospital for blood and platelet transfusions, he danced and played with music therapist Marc. On Saturday he slept in and played with grandparents. And on Sunday he felt so good he played air hockey with my sister and then lip-synced songs on Rock Band, the music video game.

Today we thought we'd find out about his wish trip, which if he keeps doing this well seems a sure bet. But paperwork has yet to be completed and there are a few things yet to sort out.

There's a lot that goes in to a wish trip. Fortunately we dealt with many of them when we took him to Vancouver in January. We know what he'll need if we go to Orlando.

Oxygen, for instance. His needs are higher now than eight months ago, but that just means we need to use air from the plane when at altitude, then extra batteries for the oxygen concentrator machine to get through a longer day of travel.

His platelets are much worse and he may require daily transfusions in the U.S., where specially-matched platelets won't be available due to crossing the border. They can't just look at the testing done on his blood in Canada and trust it. Their own testing would take two weeks and we'd be gone after one.

Fortunately there are two children's hospitals a half hour from Disneyworld.

As for the flight itself we figured out that Westjet has direct flights, but only on Saturdays. So barring another downturn we'll be on one of them, either this Saturday or next.

Tonight I'm driving back to Medicine Hat. My work hasn't complained a bit about my being gone this whole time and I owe it to them to work when I can.

I thought I'd be coming home to organize a funeral. Instead I'll pick up a few extra things for the trip of a lifetime.

How much longer will we have? Nobody knows. We'll roll with whatever comes.

Holy cow, what a week for our Extra Life efforts. Thank you all!

The Lion King tickets were won after a total of US$2,025 raised in a 24-hour span, then promptly donated back to the hospital which gave them to a teenage girl with cancer.

Since then we've raised another $2,000, and picked up a new goal: $30,000. Kristine, Steven and their children Nolan, Gavin and Ellie have pledged to all shave their heads if we can reach that mark.

Already 20 per cent of the way to the $20,000 goal and Trish's shaved head, we have some new prizes to announce!

- Men in Kilts (http://meninkilts.com/calgary/) has donated a $100 gift certificate for use in Calgary with any of your home care needs. They do everything from carpet cleaning to lawn care and snow removal. You'll also get two beer mugs. The winner will be drawn at random from everyone who has donated once we reach $5,000.

- Helping Families Handle Cancer (http://helpingfamilieshandlecancer.com/) has donated a pair of T-shirts - watch Facebook and Twitter for when to donate and win instantly! Dom will even sign them for you...

If you want to help us raise money for the Alberta Children's Hospital, email me at smrooney@gmail.com.