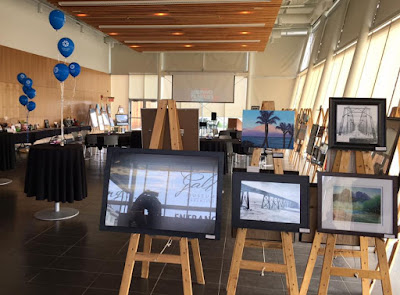 A couple weeks ago I looked out on to the green belt behind our house and saw something amiss with Dominic's memorial bench.

It's a couple hundred metres away but you can always see the white of the plaque set against the blue bench. And I was pretty sure it wasn't there.

First thought, rage. Who would do such a thing?

Second thought, reason. Nobody would intentionally do that. It probably just fell off.

Third thought, ennui. I'll be sad today and deal with it tomorrow.

It's back up now, but my listlessness lasted a week before contacting the city. They came out right away and fixed it. Hopefully with stronger glue.

It's been a long month, but we're almost through it. Tax season is rough for Trish, who's working overtime six days a week, and it's rough on me because I'm a big baby and miss her to pieces.

And yet, the highlight of my month so far has been the day when I was furthest from her.

On Saturday, April 23, I went to Lethbridge to share Dominic's story at Helping Families Handle Cancer's art auction. It was a different sort of speech, because few in the audience knew who I was, so I wrote it. I've told his story enough times that I could probably talk off the cuff, but I forget how cathartic it is for me to write, too.

My sister Erin helped put the event together, along with a fantastic group of volunteers and of course HFHC founder Carie and her family. Erin's phone overheated while trying to tape me so the video below is missing a couple minutes of the speech, but if you're on this blog you can likely guess what I said: Helping Families became part of our community, and we're forever grateful.

I wish I'd been able to meet the other family featured Saturday. Alyssa is a 17-year-old battling a rare form of cancer, and hoping one day to get back to weightlifting which she's incredible at. Alas, she was at a volleyball tournament and couldn't be at the event, so we got to hear her story read second-hand. One of the drugs recommended to treat her cancer isn't covered by any insurance, but it still costs $1,200 a month. So HFHC is helping to cover it instead.

We're still taking orders for #Dominicstrong dry-fit shirts until May 1, and all proceeds will go to Helping Families, which assists families of kids with cancer across southern Alberta. They raised more than $14,000 Saturday night, which is amazing, but keep in mind they also gave out more than $145,000 last year in assistance.

I had some great talks with folks at the art auction after my speech, and as usual the common theme was them telling me how strong I was for sharing it. The truth is, I'm incredibly, irrevocably broken. How do you do it, one couple asked. My answer is that lots of people find a way. You'd never want to go through it, but what other option do you have? You keep putting one foot in front of the other, but as long as you keep moving, no matter how slow, you're still moving.