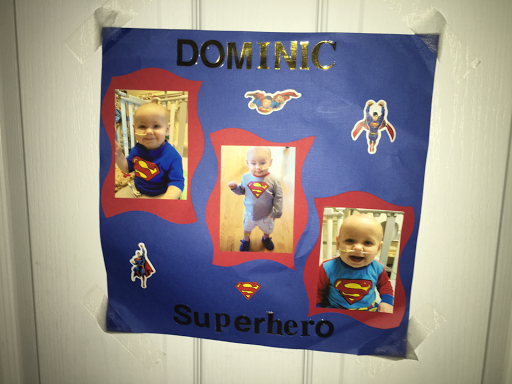 The dim blue light has been turned off. The door is closed, though the scrapbook-style sign still proclaims this is Dominic's room.

Last week I noticed the medical tape holding it up for the past year was starting to give way. I pushed it back up but couldn't help but think: it's going to come down soon anyhow.

His urn has moved onto the mantle above our fireplace, beside the picture of Michael, Trish's nephew who died of SIDS 20 years ago, and our dog Megan who passed two months ago.

There's still a brown Ziploc bag in his room for holding chemo drugs, and his crib sheets remain unchanged. We either haven't had time or energy to deal with it. With all of the fundraising happening, we likely won't for another few weeks.

People ask Trish "have you finished the new baby's room?" She laughs. No, no, not even close.

This is all to say we are moving forward and also not going anywhere. It's possible to do both. The charity work is how we parent our son now in his absence but we will soon have to balance that with parenting another child.

We will have another ultrasound at the end of the month and hopefully baby will cooperate and let us know if it's a boy or a girl. That will dictate a lot; we have so much stuff for a baby boy. I think there's a lot of wishful thinking that we'll have a girl because that's the only way we'll need any clothes for the kid's first two years. Forget about toys - we may have given a lot away last year but we also kept plenty.

It's now time for the final two week push for donations to the Alberta Children's Hospital through our Extra Life campaign. If you choose to donate online you'll get a few things we couldn't offer through the online auction: A tax receipt, and chances to randomly win some prizes! Every donation from now until Oct. 31 goes into a random draw for a pair of tickets to see the Calgary Flames play the Columbus Blue Jackets Friday, Dec. 16. These tickets are in the fancy lower bowl - you're 20 rows from the ice. Also don't forget about the gender reveal contest - include a note in your donation saying "boy" or "girl" and if you're right you could win a limited edition silver #Dominicstrong word art mug plus a second mug (pink if it's a girl, blue travel mug if it's a boy).

Our team has raised US$14,000 as of this blog post. That's 70 per cent of our original US$20,000 goal. Game day Nov. 5 at the Medicine Hat Lodge starts at 8 a.m. and goes 25 hours - come by and play some games with us and make a donation! Cash donations on site don't get that tax receipt but we do have a Nintendo 3DS to give away! The official baby gender reveal will happen at 4 p.m. so if you want to come for a quick visit that will be an exciting time. No head shaving this year (unless someone wants to volunteer?!), but still lots of video and board games to play.
Posted by Sean Rooney at 07:59