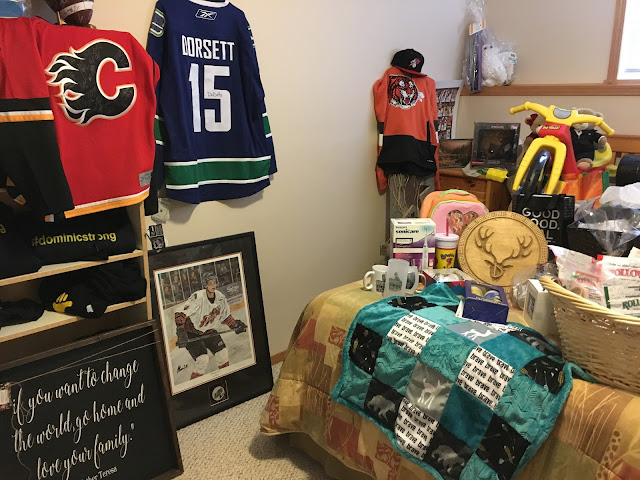 After raising some $65,000 last year for the Alberta Children's Hospital through gaming charity Extra Life, it was hard to decide what goals we'd set for the #Dominicstrong team this year.

Obviously, they wouldn't be that high. We asked for donations in lieu of gifts or flowers in his obituary, and money like that isn't likely to be duplicated.

We had a meeting to figure out what major events would take place. The mini-golf fundraiser was a go for Sept. 11. We set the online auction to wrap up Oct. 2. Finally, the 25-hour game day starting Nov. 5 would cap it off.

Right away, I said I wanted us to raise US$20,000 (all Extra Life donations are made in US dollars due to the leaderboards including all of North America). That's about $27,000 Canadian, so less than half of what we raised in 2015.

I don't think Trish believed we could get there. With a month to go until game day, I'm still not sure. But we are half-way there.

This blog may have been quiet the past few weeks, but only because we've been so busy. The mini-golf fundraiser had a major setback when rain forced its postponement. Still, on Sept. 18, $1,000 was raised. The highlight for me was getting a $100 donation for having my face painted with Dom's Super D sign.

We had barely started asking for donations for the online auction at the start of the month. We will need more help next year, but for this year, it was basically Trish and I. We spent entire weekends messaging people, and pretty soon had just as many items as the auction had last year.

I believe the poor economy actually helped. Whereas big-money auctions require you to put out a lot of money with little chance of winning, with ours you could reasonably expect to spend $50 and get a $50 gift card, or something worth more than that amount. The timing was pretty good for Christmas shopping, and of course you get to feel good about giving to charity. For businesses, if every place gives something small it may not seem like much to their bottom line but combined, it becomes something incredible.

The auction happened within our #Dominicstrong Facebook page, structured as a photo album where every photo is an item which you bid on by commenting. Needless to say, my phone went beserk when the auction began and never really shut up. I'd wake up to 90-some notifications every morning.

It's all worth it, of course. I just got the last payment done tonight, and our total, incredibly, is $10,005.

Well, actually it was $34 less than that, but I started telling a couple people we were a few bucks short of five figures and a couple random donations came in.

Converted to US dollars it'll be around US$7,500, which combined with funds already raised from the team puts us at more than US$11,000.

A huge thumbs-up to everyone who helped, be they businesses or individuals who donated items, folks who bid on items (whether you won or not), and even anybody who shared information about the auction. Every dollar from the auction gets donated to the hospital, and every little bit helps.

Now we need to get the rest of the way to our goal. It's time to ask people who donated a year ago if they'd consider helping again, whether in Dom's memory or because there are so many other kids who get help at the hospital.

Oh, and we're going to do a gender reveal for our baby during our Extra Life game day at Medicine Hat Lodge Nov. 5. We had planned to reveal right here, but the baby didn't co-operate at the last ultrasound. Another is scheduled for just prior to game day. Donate anytime between now and then to either of our donation pages (http://www.extra-life.org/participant/sean or http://www.extra-life.org/participant/trish) and include a note saying boy or girl, and you're entered into a draw for a yet-to-be-determined prize.

Also, watch the Facebook group or the #Dominicstrong hashtag on Twitter as we have some other things to give out based on donations.

We're not even finished delivering items this year, and already work for next year's auction has begun. I'll even tell you what the first item will be: The exact same shirt that I got signed by a bunch of celebrities at the Calgary Expo this year. The auction winner, Jen, has donated it back to us and I plan to get more signatures on it, and we'll try to sell it again in 2017. What a great start.
Posted by Sean Rooney at 01:22