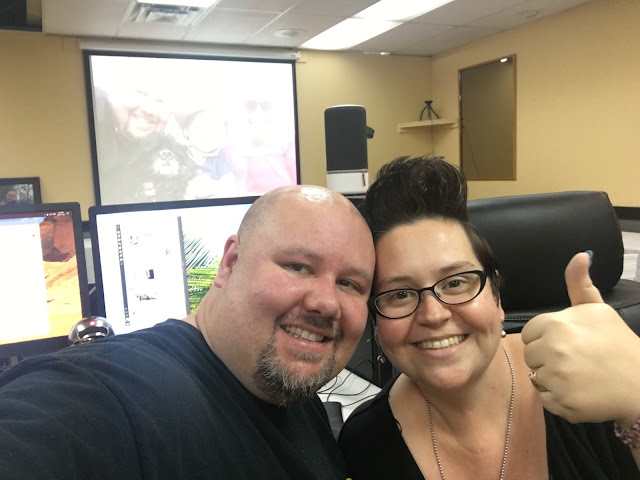 I know this blog has been quiet. Sorry about that. After the 25-hour Extra Life marathon in November we needed a break from everything.

Here's what it looked like if you visited the Extra Life channel from 4-5 p.m. Mountain time that day (skip to the 15-minute mark for the gender announcement):
In short, IT'S A GIRL! We've even had a follow-up ultrasound confirming the news. This means there will be clothes to buy, and a bit of separation from the newborn being compared to Dominic. They'll no doubt learn about him someday, the big brother looking down from above, but it's a bit of a relief not re-using all of his stuff.

The rest of the 25 hours was fantastic. We played tons of games, at the 23rd hour I even sweated out some Just Dance on the stream. A Stormtrooper from the 501st Legion even dropped by. We wound up blowing by our US$20,000 goal, the team having raised $23,196.03 as of the writing of this blog. Donations can be made until Dec. 31 but we won't be asking for any more. There are plenty of other charities deserving of your support this time of year. There was also talk of returning to Orlando in March for the next incarnation of Extra Life United. Our obstetrician has put a damper on that, as it'll be too soon after the baby comes for Trish to be flying on a plane. I might go, and if you're interested registration is now open (http://www.cvent.com/events/extra-life-united-2017/event-summary-c3a5750363df4f85a2a319c5621a68bc.aspx): It will be a great time to connect with the Extra Life and Children's Miracle Network communities.

I'm going to hand off the rest of today's blog to Trish:

After Extra Life we figured our world would slow down a bit, but it hasn't. Sean has been sick and I seem to have caught his sickness. Also with Christmas coming up it's been a hard time. I've always loved Christmas, the lights and decorations and present and parties, such a fun time of the year. Last year, we ignored Christmas completely and took off to Vegas. We had a great time, but even in Vegas you can't completely ignore Christmas.

This year, we aren't going anywhere due to baby girl being due in a couple of months and Sean having to work Christmas this year, 'cause we can't remember the last time he had to work Christmas, so it was definitely his turn.

Today is 15 months since Dominic passed and our second Christmas without him. And it's hard. We see pictures of happy families setting up their tree and lights and think, that used to be us. At some point we will make it back there I hope with new baby coming, but it will always be a hard time of the year.

Sean's talked about putting up Christmas lights, but with him being sick the past week or two it hasn't happened and I'm very indifferent about it. I won't stop him from doing them this year, but I'm also not really encouraging it.

People have also asked if we are ready for baby girl's arrival and I just laugh. No, we are not ready. Technically we have a crib and a car seat, so she can come home and have somewhere to sleep. Dominic's room, which will be baby girl's room, still has all of Dominic's stuff in it. The closet and drawers are filled with his clothes and the crib hasn't been changed. At some point we will have to go in there and clear it out and start to put baby girl's stuff in there, but there just never seems to be time. I've bought Tupperware bins to put all of Dominic's stuff in, but that about as far as we've gotten. I'm off work around Christmas so I keep thinking that's when I'll get around to it. But who really knows.

People say, why don't you use a different room then. And this is where my practical side comes out. I'm not buying a new crib, new dresser, new change table, and new rocking chair. It just doesn't make any sense. And Dominic never outgrew those items so they are all still in his room. If you take that all out of his room and move it to a different room, then his room is not really his room anymore. So there just doesn't seem to be a point in that.

Technically baby girl could come anytime, but she's not due until February 28, so I'm hoping she'll stay in for a while longer. At least until I can finally get around to giving her her own room. I hope that for her life she doesn't feel like she's living in her brother's (who she will never meet) shadow. And so I do hope we can start off by giving her her own room when she arrives. It's just going to be hard. But that's how life is. Life is hard, so we have to put on our big girl and boy pants and deal. We don't have any other choice.
Posted by Sean Rooney at 13:37