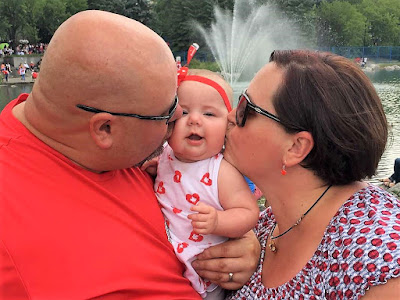 It's the same room, in the same house, and sometimes when I hold my daughter I feel like it's four years ago and our time with Dominic was just a dream.

I wouldn't describe it as a nightmare because so much of the time we had with Dom really was wonderful.

She has his fantastic eyelashes, the ones all the women said only boys ever get. When she smiles it lights up a room, just like him. We spent almost the entire day outside on our deck Friday, at one point cheers-ing our drinks and her bottle.

But his urn with the superhero D and the music notes is here too. And two of the balloons - one of a monkey, one of Cookie Monster - that were part of his memorial service have somehow not deflated a bit. And from the deck we can always see his bench and the playground.

We visited the Alberta Children's Hospital again recently to see a couple friends whose kids were getting treatment there. In the cancer clinic we recognized fewer faces than last time, something you know will happen but makes you realize it's been two years since Dom stayed there.

One of them came up to me though, looked me straight in the eye and said with the most sincere voice she could find "thank you for bringing her here. Really." We might have said goodbye to him, but many of the staff there deal with so much devastation that it's tremendously valuable to cling to every bit of positivity they can find. Even the sad stories like ours can be filled with joy in the long run. You just have to find it.

I hope there's lots of joy at the July 22 Superhero Night at Athletic Park in Medicine Hat. The special jerseys will be sold off for $100 apiece, proceeds going to the hospital, and we'll be there letting folks know about all the other charity events we have planned for #Dominicstrong this year.

One new one I can announce here: Five Guys, the fast-food chain which opened its first Canadian location in Medicine Hat a few years ago, will be donating 20 per cent of each purchase made at the Hat location on Sunday, Aug. 20 if you say at the till you want to support the Alberta Children's Hospital. We're thrilled to have their support.

I was offered to throw out the first pitch at the baseball game next weekend, but I basically did that when Dom got to throw it two years ago. So I found a special little girl from Medicine Hat to do it instead. Violet has been kicking cancer's butt for more than a year and we are so honoured to have her help out. Please come out and support her, us and all of the kids who use that hospital.