As old as he'll ever be 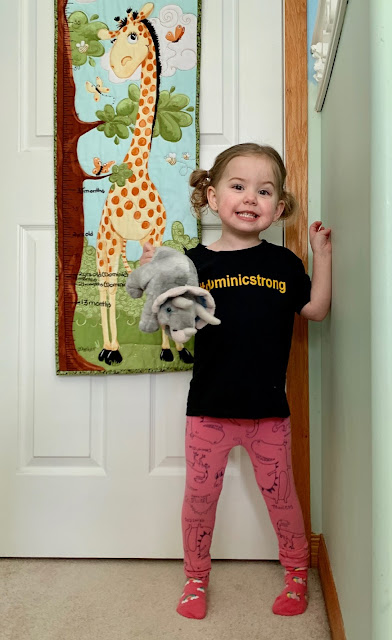 That's how old Dominic was when he took his last breath.

When he died, he'd never said more than a couple words, "mom" being his favourite. A stroke took his speech and much of his mobility soon after he was diagnosed with leukemia.

He was also gentle, full of love and never seemed to complain no matter what awful things were happening to him. His thumbs-up became the signature for our #Dominicstrong fundraising for a reason.

By contrast, Samantha sings and dances, tells us she loves us and also throws epic temper tantrums when told she can't have what she wants.

She sees photos of him and we tell her that's her brother, but she's far more excited about going to hang out with the girl who's near her age at her day home. That's someone tangible. She'll never hug her brother or sit with him on Santa's lap or have a snowball fight with him.

And while he's stuck at two, she'll turn three next month and continue reaching milestones that never seemed possible for him.

He had a growth chart with only a few records marked on it. Samantha was given a similar one but I decided to mark her height on his chart instead, so that she'd always see his name there too and maybe start asking about it.

We hung it on the back of her door, but she's pulled it down so many times it was sitting crumpled in a spare room - a room that would've been his by now.

Yesterday I fixed it back on her door, had her stand beside it and we took a couple photos. Unsurprisingly she's far ahead of him at this age - cancer and chemotherapy do a number on kids' growth. 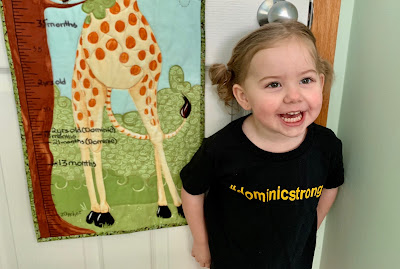 We're proud of her, but it feels like he's getting further and further away. The memory of him is frozen, and every winter a new layer of ice gets added around him. It's just a little bit harder to remember his face, or what his laugh sounded like, or how he walked with that awkward gait - another side effect of the stroke.

Today she's an age he was for the last time. Now he's the baby brother, not the older one.

She'll be a great big sister. She'll learn his story, and we'll continue to raise money in his memory. But what will that look like? There is so much uncertainty in our lives right now, we're not honestly sure.

I know this blog has been almost non-existent in the past year. Aside from our charity events, there's not much to say. Thanks to those of you who continue to follow his story and support us.
Posted by Sean Rooney at 13:09