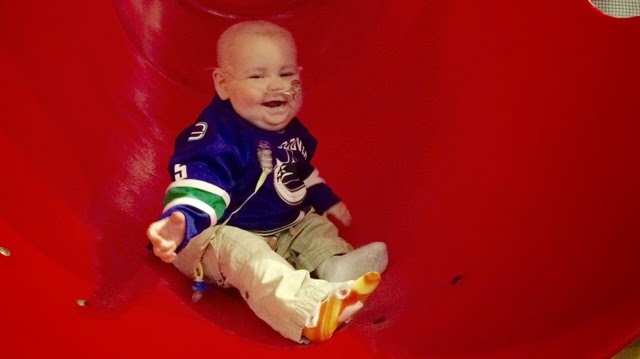 On Saturday, Dominic got his blood tested, spent time in the Vancouver Canucks dressing room, took a boat ride and went down a slide at an indoor playground — all before lunch.

So much for a lazy last day in town.

We will fly back to Calgary Sunday, but with so many more memories to show for it. Most notably, once again we got a special invite to Rogers Arena from Canucks coach Willie Desjardins. At first we said no because it coincided with a scheduled appointment at the hospital, but once the nurses caught wind they made sure we had time.

Dom strode around the locker room and even sat on the bench once everybody else was gone, got to see the coaches office and training room. He was most interested in opening and closing drawers, as usual. The Canucks have a lot of drawers. 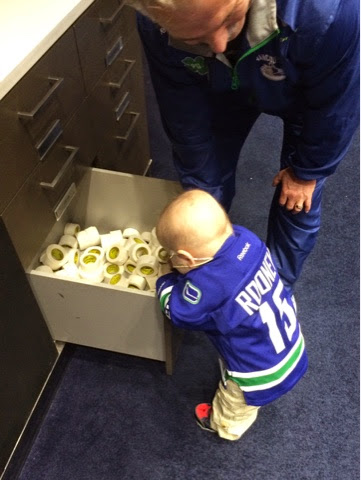 Afterwards we headed to the B.C. Children's Hospital for the last time. His blood counts were what we'd hoped — platelets high enough after Thursday's extra transfusion that he probably won't need another until Tuesday. A week after we'd spent a six-hour day there, this final time it took a half hour.

We drove to the Aquabus — a miniature ferry which took us to Granville Island. There, a kids area included a slide Dom went down a few times before we were overcome with paranoia about all of the germs. A stop at an expensive restaurant at Granville proved to be our last real outing. 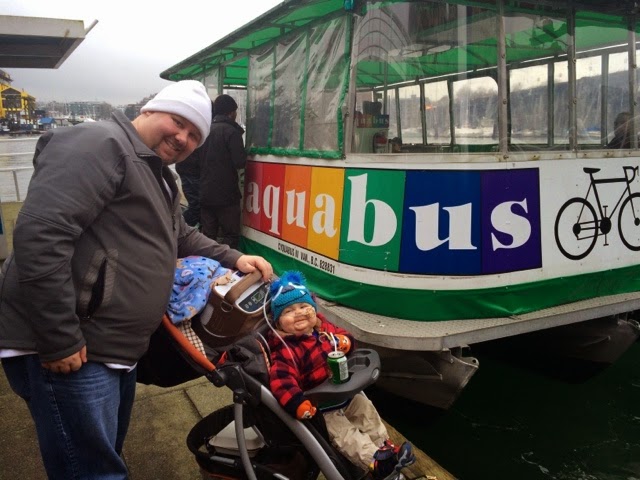 On the way back to the hotel Trish couldn't help but note she'd just figured out driving downtown without the need of a map (thank goodness for Google Maps). Naturally, this came on exactly the last time we had to find the hotel.

In other words, we're plenty comfortable enough here that it's time to leave. Any longer and it would stop feeling like a vacation.
Posted by Sean Rooney at 00:13