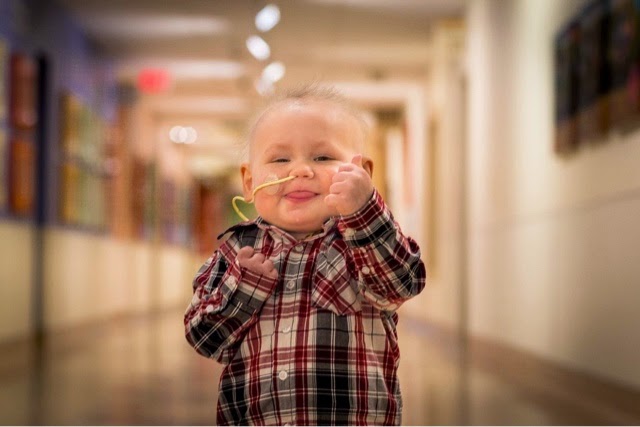 We always knew this last attempt to beat Dominic's leukemia had a good chance to fail.

This was pulling the goalie in the last minute. Throwing the long bomb to the end zone. A desperation shot at the buzzer.

Some doctors at the Alberta Children's Hospital suggested it was foolhardy, that we should focus on what little time we had left with our son. Our main doctor, Tony Truong, agreed with us that it was worth a try.

Today, Tony walked in amidst me getting ready to drive back to Medicine Hat and Dominic screaming as it was near his nap time. With no final decision as to whether we'd go ahead with a brain biopsy — a big group of doctors is meeting about it today — there was no point in me taking another week off of work. I can always drive back if the biopsy is going ahead.

As always, Tony smiled, but this time he had no interest in small talk.

I think he expected more of a reaction. We didn't cry, barely hugged, and I kept moving about the room trying to pack up my stuff. We both admitted we thought it's a bigger deal than we were making it seem.

Even now, hours later, I'm not really sure what it means. Tony said he was surprised by the results of a bone marrow biopsy done Friday, along with Dominic's second MRI of the week. The cancer, which had comprised 30 per cent of his marrow when we moved to the T-cell treatment and as low as five per cent since he relapsed in August, is now at zero.

In other words, the DLI treatment, with the T-cells having caused graft versus host disease, is working.

We were quick to remember that at this time last year we were celebrating remission as well. His very first round of chemotherapy put him into remission just six weeks after his original diagnosis. It didn't last, however, and that makes today an odd mix of elation and stress.

It's certainly the best-case scenario, and suggests there's not leukemia in his brain. The hope is that we are not just kicking the door back against the leukemia but ridding his body of it for good, never to return.

The Hail Mary has worked. Now we get overtime. We'll take it.
Posted by Sean Rooney at 18:20