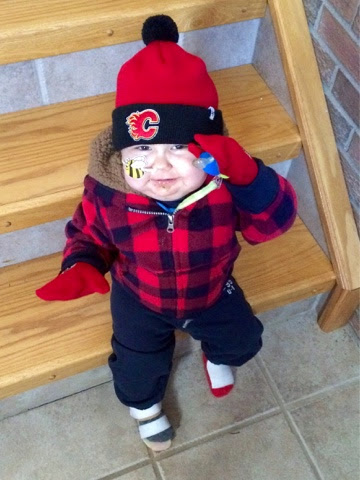 For the past 16 months we've had no choice but to be different.

No swimming because of his broviac line. No eating out because of his lack of an immune system. Hardly any family time because he was always in hospital.

Last week's wish trip to Vancouver not only served as a needed chance to relax and make memories, but also to transition into a stage with fewer rules and more normalcy.

We took him out to restaurants. To shopping centres. To an aquarium and a hockey arena teeming with people. So this week in Medicine Hat, when Trish agreed to go out with some friends and their kids, I had to remind her that meant Dominic and I could come too. We didn't have to stay home.

Being in a hospital room, he's learned to walk twice, has never really talked beyond the odd "mum" once in a while, but it's not all because of the regression predicted by his treatments. He's barely had any socialization with kids his own age - how do you learn to talk when you're never around peers who are also learning? Even in hospital, he was in isolation in his room since August. And we never allowed toddlers near him because let's face it, they're germ factories.

If he's going to die anyways, we are adjusting by taking more of these risks. It's either that or confine ourselves to more isolation. We'd rather he lives while he lives, given the lack of a future.

For some people it's undoubtedly odd to see us so happy this week. We should be devastated, depressed about what's going on. But the truth is, it's a relief to be doing something different. In and out of hospital, never sure of what was next, it wore us down. We'll have plenty of time to feel awful later; for now, his smiles and giggles are more than enough motivation.

Our doctor initially said we might have weeks, maybe months if we were lucky with him. Well, that was a month ago. And he's not showing any signs of a downturn yet. It'll happen, no doubt, but our team back in Calgary is pleasantly surprised thus far not to see the supposedly super-aggressive type of leukemia he has growing faster. So I'll go back to work next week.

Medicine Hat Hospital is now his home base. In order to make things easier they admitted him into a special isolation room which was built by the Ronald McDonald House of Southern Alberta. He only has to come to get blood checks and transfusions, which amounts to twice a week so far. The staff have gone out of their way to make us comfortable, getting faster with his transfusions each time.

Is it completely normal? Of course not. He'll keep getting odd looks, from his chubby body (a side effect of steroids), to his feeding tube and the broviac line caps sticking out from under his shirt. We still have to wrap his torso in plastic before bath time, and hook him up to oxygen at night.

But it's nice being home. 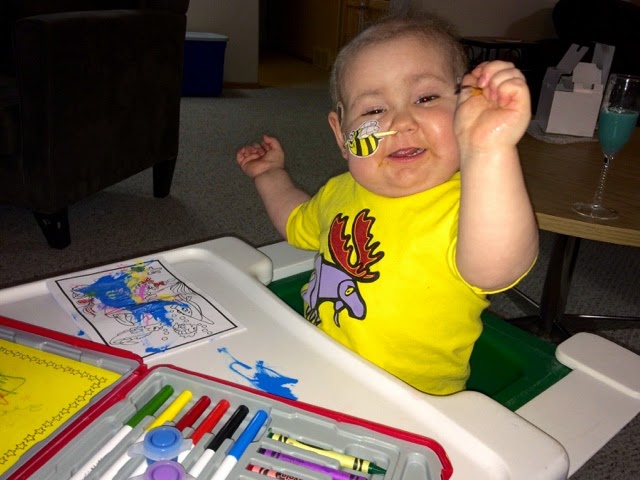